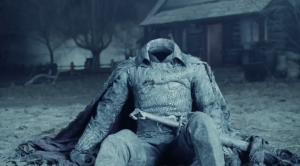 “A dictionary begins when it no longer gives the meaning of words, but their tasks. Thus formless is not only an adjective having a given meaning, but a term that serves to bring things down in the world, generally requiring that each thing have its form. What it designates has no rights in any sense and gets itself squashed everywhere, like a spider or an earthworm. In fact, for academic men to be happy, the universe would have to take shape. All of philosophy has no other goal: it is a matter of giving a frock coat to what is, a mathematical frock coat. On the other hand, affirming that the universe resembles nothing and is only formless amounts to saying that the universe is something like a spider or spit.” – Georges Bataille, Formless

Click here to view the details for A/cephalic Discontents Session I (April 2, 2016)

Mere meaning gives “headless” for acephale, from the Greek a-kephalos. But to see the task in a word it is often first necessary to take the word to task, as André Masson did when he sketched the image of Acéphale for the inaugural issue of the eponymous journal in 1936. A male figure is stretched, erect, copying the pose of the Vitruvian man. In his hands, a burning heart and a knife; the muscles of his arms and legs bulge; in the place of his sex is set a bare skull. This image offers a figure of virility, power and aggression. Lacking head and organ, its phallic body still bears all the traits of a deluded self-sufficiency. It is like a catalog of everything for which it would be the task, today, of acephale to erode. Certain feature, however, allow this figure to be read against itself. The headlessness that gives the figure its name remains, despite the firmest line, indeterminate: Loss does not prescribe what follows in its wake. In addition, there is the gaping abdomen, which harbors an intestinal structure knotted into an internal labyrinth. One could imagine the labyrinth distending monstrously from the center to engulf the whole man in an explosive, maze-like embrace. Headless, he cannot see ahead; his joy is not in the implements of fire and knife, nor the operations of ritual and power, but in the blindness that subjects itself anew to the unpredictable. According to this fantasy, he wanders the labyrinth, unable to extricate himself to gain an overview. Unsexed, entangled, acephale becomes nothing but the movement through the labyrinth. It might be that the labyrinth was never there: it was only the trace of the figure’s errant escapes burrowing further, so to speak, into its own outside. This, at least, was Bataille’s vision: “His guts are the maze in which he has become lost himself, losing me with him, and where I rediscover myself being him, that is — monster.” Masson’s sketch, if it had its way, would determine to a ’t’ the little ‘a’ that knocks off the head in acephale: energy against stasis, the muscle against the bone, the animal against the human, the skin against the brain, excess against measure, the lovers and killers against the philosophers and scientists. But it is perhaps exactly the task of the word acephale to defeat itself by means of its own resources, in the throes of a fabulous vision. Today, we might counterpose to the structure of opposition, so deliberately present in Masson’s sketch, the operation of labyrinthine opening which it invites. The opening that is simply losing our heads, in every sense of the phrase.