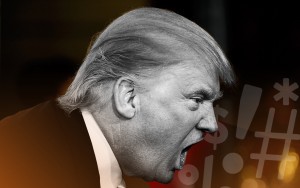 “Sigmund Freud had a word for those whose unique gifts permit them to bend reality to their will: artists. According to Freud, the artist “allows his erotic and ambitious wishes full play in the life of fantasy. He finds the way back to reality, however, from this world of fantasy by making use of special gifts to mold his fantasies into truths of a new kind.” Trump has to be understood, then, as a reality artist, one who is adept at the strategies that turn his biggest whoppers into reality. It is reminiscent of Charles Foster Kane, in Orson Welles’ classic film, who, when informed by the war reporter he dispatched to Cuba that there was no war to be found but only delightful girls and beautiful scenery worthy of prose poems, famously replied, “Dear Wheeler, you provide the prose poems, I’ll provide the war.”

By the sheer force of his personality, power, bullying tendencies, and money, Trump can bend reality to his perspective, which he does using a simple technique: He simply shifts the evidence for what is real from facts to feelings.” – Steven Reisner

Click here to read the full article in Slate