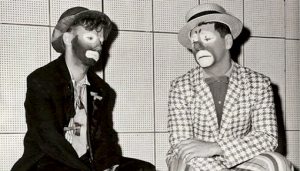 Rape is an act of physical and sexual violence; jokes are understood as a kind of psychic disruption, with humor forcing a release of pleasure. According to Freud, jokes can function as a shared victory over social repression, and “jokes that have a purpose run the risk of meeting with people who do not want to listen to them.” What is the purpose of the rape joke? Do we want to listen? And given that the ear is an orifice we cannot close, is it ever possible to consent to humor?

ABOUT THE PARTICIPANTS
Jeff Dolven teaches poetry and poetics, especially of the English Renaissance, at Princeton University. A book of his poems, Speculative Music(Sarabande Books), came out in 2013. A new book of criticism, The Sense of Style, is forthcoming.

Vanessa Place is a poet whose books include Notes on Conceptualisms (with Robert Fitterman; Ugly Duckling Presse, 2009), The Guilt Project(Other Press, 2010), and Boycott (Ugly Duckling Presse, 2013). She most recently translated Frank Smith’s Guantanamo (Les Figues Press, 2014). The first poet to perform as part of the Whitney Biennial, Place also works as a critic and criminal defense attorney, and is CEO of VanessaPlace Inc., the world’s first poetry corporation.

Gayle Salamon is assistant professor of English and Charles H. McIlwain University Preceptor at Princeton University. She is the author of Assuming a Body: Transgender and Rhetorics of Materiality (Columbia University Press, 2010), winner of the 2010 Lambda Literary Award in LGBT Studies. She is currently at work on two manuscripts, one that explores narrations of bodily pain and disability in the contemporary memoir, and a second that analyzes the murder of fifteen-year-old Lawrence King.

Jamieson Webster is a psychoanalyst in private practice in New York City. Her books include The Life and Death of Psychoanalysis (Karnac Books, 2011) and Stay, Illusion! The Hamlet Doctrine (with Simon Critchley; Pantheon, 2013). She has written for the Guardian, the New York Times, and the Times Literary Supplement, as well as contributing clinical and theoretical articles to many psychoanalytic publications.