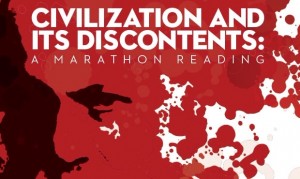 “The inclination to aggression constitutes the greatest impediment to civilization.”
– SIGMUND FREUD, 1929

Why is the world so violent? Why can’t civilization contain it? Freud knows!

“Men are not gentle creatures,” Freud wrote, “but … creatures whose instinct (is) aggressiveness.”

“Freud tells us that humans have destructive urges that we direct outwards,” said Tom Carter, the managing director of the Hanover Search Group, and a longtime U.S. diplomat who served in Nicaragua and was a delegate to the U.N. Security Council. “Freud was also correct in saying that violence demands catharsis. Today, in response to pronounced racist aggression in America, protests such as we see around NYC have a cathartic impact.”

“I spend a lot of time trying to convince myself and others of innate human goodness,” added Micah Bucey, Community MInister of the Arts at Judson Memorial Church, “but this is meaningless without acknowledging the destructive and violent impulses we all feel. ‘Civilization and Its Discontents’ explores what it means to be human, warts and all. In our current crises of human destruction, we need honest exploration now more than ever.”

Kudos and Commentary from Evan Malater

I wanted to offer big congratulations to Tracy, Will and those who contributed to the Freud out Loud event. When I arrived I learned that already 600 people had crossed through the doors on a cold and rainy day.

The first thing that is obvious is that the group took big risks. Just as Unbehagen is about to embark on a series of experiments in Case Conference this Saturday, this group performed an experiment. A lot of our focus in DU is on whether we can freely play and experiment, whether it is in fact possible to create events that invite thought and playful elaboration. So, in that spirit, here are some thoughts I had on the event, offered with admiration for the daring of this performance:

What was billed as a reading turned out to be something closer to a large public performance piece. Where a reading can be an intimate and minimalist affair of text, reader and audience, this event took another gamble towards the maximal as multimedia with stage props and projected images. The biggest gamble was to create a simultaneous reading of different chapters within the same large space by different people.

To think about the stakes of this gamble, I would explore various tensions that the performance raises:

1) The audience may approach the event with the explicit expectation that they will find a container to contextualize and interpret modern violence through the reading of the text. But the event has no center or explanatory claims. Freud himself is not so much out loud as channeled and reproduced. Freud is spilt: the careful linear explication of the text is cut and interrupted by sight, sound, by competing fragments from his very same text read from another part of the room.

2) The text itself resists its performance. While the boldness of the “out loud” evokes resistance and protest, Freud himself is rather internal and silent. He theorizes forces that are out loud in their effects but silent and spectral. What can be said about death drive out loud? Is it proclaimed, protested or celebrated? As a result the reading out loud of this questioning text that proceeds cautiously, with many twists and turns, has a rather odd effect when performed. The questioning uncertainty of the solitary thinker when performed becomes something other, an amplification that at times evokes a sense of that can border on satire.

3) Freud’s text famously begins with his confession of his inability to tolerate the ‘oceanic’ immersion characteristic of meditation or Eastern practices. The event in contrast, reaches for a kind of non-linear immersion in text, sight and sound that Freud himself would likely resist. In fact there is a big ambiguity in the immersive effect that needs to be thought about if we are to consider how the form of the event is consciously channeling or resisting the text – or doing both. Given that death drive itself can be seen as an immersive force that dissolves the binding of the pleasure principle, it is not clear if an immersive performance with no center is in protest of the forces of death drive or if it performs those very forces ironically as an object of aesthetic encounter, in hopes of transforming those forces in a public encounter.

4) Finally the text itself doesn’t actually go anywhere definitive. It starts by proclaiming its own inability – to allow Oceanic immersion – and ends with a confession that Freud has no final answers to the problem of violence – only a question – which will prevail, eros or death drive? The performance of this question is not and cannot be reassuring or explanatory. Freud explicitly states that he is not up to the task of providing further answers. Accordingly, the text is a call for thinkers of the future to carry on his thinking. Therefore a performance or reading can’t promise an immersive, immediate or obviously available out loud experience akin to entertainment. Perhaps the risk of using the tropes of ‘out loud’ is the impossible promise of an immediately available experience rather than the passing on of an enigma that requires ongoing consideration and interpretation as the demand and effect of experimentation.