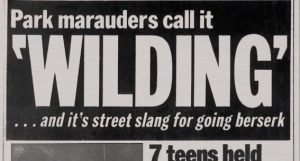 “Our analysis tries to avoid the trap of analyzing Trump in order to follow the precise Trump logic set out in his full-page newspaper advertisement, on its own terms. Since this advertisement contains a rare example of Trump explicitly writing about psychoanalyzing, we abandon the many fruitless attempts to psychoanalyze Trump and instead use it as the basis for examining the conditions by which Trump himself deigns to psychoanalyze. We posit that under these conditions of disciplined reading, Trump will in effect psychoanalyze us. By this we mean that the conditions of a Trump presidency place us in the position of being analyzed by Trump and not the reverse, despite defensive maneuvers aimed at reasserting the expertise of those who so clearly lacked the understanding for anticipating his emergence. If psychoanalyzing is possible in this system, it can only come in the terms that Trump himself has set out, which we attempt to unravel. Why and when, if ever, would this occur?” – Evan Malater