“Over the last few years, definitions of handicaps and disabilities have multiplied themselves, either generating improbable neologisms or exploring language in search of an impossible formula which may combine the designation of a difference with its negation. The ensuing feeling of confusion has consequently increased. Words, the sea of words and of more or less politically correct linguistic inventions, go their way. Handicap is nailed somewhere else, like an obstinate, unemotional warrior observing the corpse of his enemy as it is washed to his feet by the flow of the river.

The task that words are required to perform is that they may open and close, dilate and bend like rubber to the needs of reality, which literally looks incomprehensible and unbearable to the “normal” human being, with no possibility of articulation of those feelings, of the mystery surfacing in the normal being’s conscience when a severely handicapped person looms on the horizon. The wish to quickly solve the problem, moving briskly from one extreme to the other, as easily as one may turn the pages of a dull book, is an unmistakable symptom of the feeling of embarrassment raised by disabilities.

The tactics are, after all, foreseeable. It is a question of covering the abyss the “normal” perceives when meeting a disabled person, which will induce such behaviours as the conscience will later disapprove. If the behaviour is, as I said, foreseeable, that is because it largely works like a mirror. If difference, if otherness raises difficulties, it starts uncontrollable or unavowable echoes in the “normal” person. Better to do away with difference, though only on an ultimately imaginary level, even though in so doing, we run the risk of reducing the peculiarity of the disabled. How shall we name that attitude? Shall we name it refusal to refuse? Let us overlook the pun: in that attitude we can perhaps detect the inexhaustible source of an infinite, though doubtful, generosity, an expression of an ill-contained wish to attain a kind of squaring of the circle, a satisfactory solution, both in terms of content and form, a conceptual pirouetting which forces thought to take an obligatory path, in which the recourse to force paradoxically veils the shadow which faithfully accompanies it: violence. Against all labels, all rhetorical formulae or catchy slogans, the range of stereotyped common sense is called upon to contain and control a “something” which remains nameless, the pale trace of a memory which the “normal” conscience must remove and reject in order to finally discover and recognise its own nature, thus consoling and reconciling itself to its own idealised image.

“The other is like me”: thus the inscription over the entrance door to a cooperative for the disabled. The sentence strikes the reader for its obvious contradictoriness. It synthesises the spirit of the movement creating it in total indifference to the determinacy of an elementary logic. If the other is like me, what “other” are they? They are no longer other than me. The problem is solved. Actually, it should never have been posed. Why pose it only to deny its existence? It is a dog biting its own tail. Citing difference only to reduce it to its opposite, to a simile laden with egotism, is to suck the other into our self-love, thus eliminating his difference and swallowing him into the apparently virtuous circle of the feeling which the disabled once seemed to endanger. The other is deprived of his otherness almost by decree. He is made identical with…with whom? With me. With the person who establishes himself as an absolute parameter for any comparison.” – Angelo Villa, Psychoanalysis and Severe Handicap: The Hand in the Cap

Click here to purchase “Psychoanalysis and Severe Handicap: The Hand in the Cap” published by Karnac in 2013 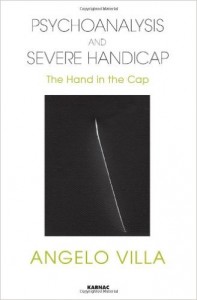