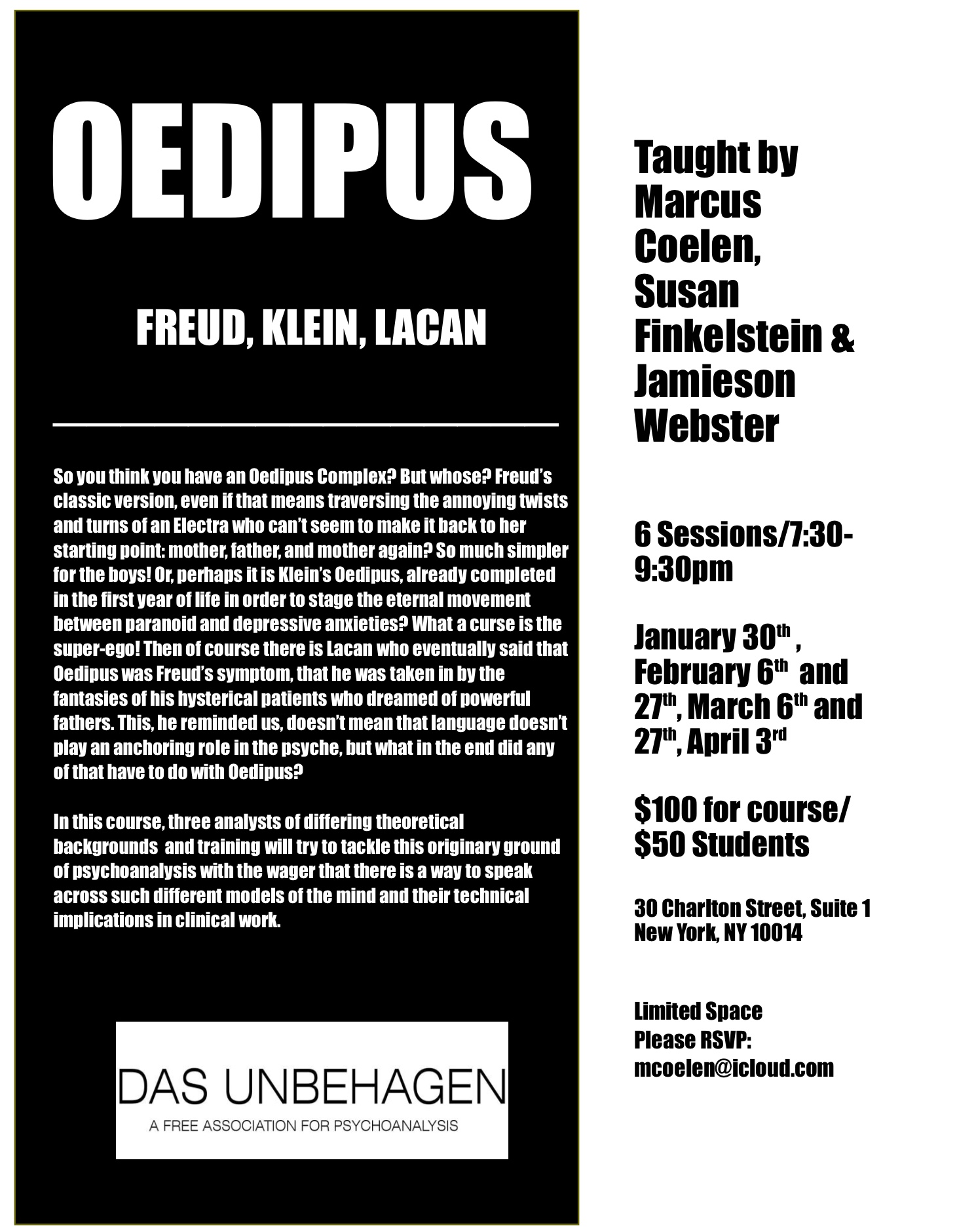 So you think you have an Oedipus Complex? But whose? Freud’s classic version, even if that means traversing the annoying twists and turns of an Electra who can’t seem to make it back to her starting point: mother, father, and mother again? So much simpler for the boys! Or, perhaps it is Klein’s Oedipus, already completed in the first year of life in order to stage the eternal movement between paranoid and depressive anxieties? What a curse is the super-ego! Then of course there is Lacan who eventually said that Oedipus was Freud’s symptom, that he was taken in by the fantasies of his hysterical patients who dreamed of powerful fathers. This, he reminded us, doesn’t mean that language doesn’t play an anchoring role in the psyche, but what in the end did any of that have to do with Oedipus?

In this course, three analysts of differing theoretical backgrounds and training will try to tackle this originary ground of psychoanalysis with the wager that there is a way to speak across such different models of the mind and their technical implications in clinical work.

Marcus Coelen, PhD is a psychoanalyst in private practice in New York and Berlin. He also teaches literature and literary theory and currently holds an appointment at the Psychoanalytic Study Program at Columbia University. He has translated into German and edited several volumes of texts by the French novelist and theoretician Maurice Blanchot. He is currently preparing, together with Jamieson Webster, The Cambridge Introduction to Jacques Lacan.

Susan N Finkelstein, LCSW is a Supervising and Training Analyst at the Contemporary Freudian Society and Faculty Member of IPTAR. She developed Understanding Primitive Mental States, a study group where she teaches The Internal World and Its Objects, The Claustro-agoraphobic Dilemma, Clinical Klein, Bion and Beckett: The Not-I Patient, and Schizoid Modes-Spatial Time Continuum at the APsaA where she is a member. She is in private practice in NYC in psychoanalysis, psychotherapy, couples therapy and clinical supervision.

Jamieson Webster, PhD is a psychoanalyst in private practice in New York. She teaches at Eugene Lang College, supervises graduate students at City University’s doctoral program in clinical psychology, is a member of IPTAR, and a founding member of Das Unbehagen: A Free Association for Psychoanalysis. She has written for ArtForum, Apology, Cabinet, The Guardian, The New York Times, Spike, and Playboy. She is the author of The Life and Death of Psychoanalysis (Karnac, 2011), Stay, Illusion!, written with Simon Critchley (Pantheon Books, 2013), and a new book, Conversion Disorder (Columbia University Press, 2018). She is currently working on The Cambridge Introduction to Jacques Lacan, with Marcus Coelen.