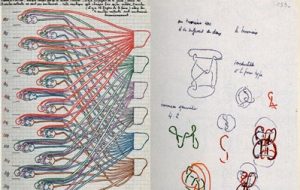 With L’etourdit we find Lacan giving an address in the form of a hypercondensed recapitulation of his life’s thinking till that time (1972) with the added surprise that since he was secretly working on Joyce, the language was hypercharged with puns, overdeterminations, indeterminacy and enigmas galore, only he forgot to tell anyone he was going to be trying out his Joyce act, to the apparent befuddlement of even those well prepared for Lacanian rhetoric.

Although we in contrast were prepared for the worst by way of various disclaimers on how hard the material was, the panel presented an extremely rigorous and grounded series of conceptual mappings by which we were able to make our way together. In the second half, Jamieson and Patricia deftly presented cases in a way that smashed the usual divide between difficult theory and clinical practice, allowing us to consider the saying and the said, according to the guiding mantra of the text:

“That one say remains forgotten behind what is said in what is heard.”

Marcus Coelen suggested that what was at stake was “an attempt to exhaust signification to a point where something else occurs.”

In practice, what made the presentation so much fun was that exhausting signification by no means meant giving up on wrestling with the text in view of it being some version of vague poetics. Nor did it amount to equally vague tributes to the non verbal or that which surpasses the reach of thinking or language. Instead there was a precise attempt through painstaking preparation, reading and interpretation to present the stage for saying theory and practice in a manner that allowed for what Marcus further described as, “the impossibility of relation as Real. None of it ended up feeling like a Lacanian Sunday school, full of in group shibboleths and passwords. To the contrary, even this most vexing of texts was presented with a generosity to all the participants, whatever their relation to Lacan, an attempt that can only be judged successful based on the frequent participation of so many in the audience who freely confessed to limited Lacanian background.