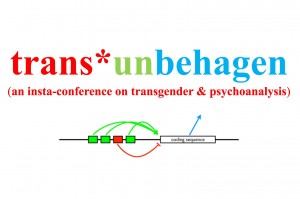 This event was born from the ashes of a listserv thread that has reached 100 posts and shows no signs of dying. So to start, a passage from a post by Cecilia Wu:

“ If it is our goal as a progressive society to maximize the range of gender expression, why bother with the being of gender? Isn’t being notorious for anchoring potential to rosetta stones of yore? Doesn’t being lend itself to the inhospitable crust of identity? Wouldn’t a trans ethic prefer to unyoke itself from the foolishness of imaginary tags, preferring to freewheel?

What you are seeing is Das Unbehagen in action. We had a Listserv discussion on trans. There we were happily or not so happily debating each other when in comes Luce DeLire with her suggestion that we stop in our tracks. By way of introduction, she graced us with this charming koan: “Why do people speak about what they don’t understand?”

By this many people understood Luce to claim that trans and cis are completely separate or that only trans can speak on trans. Much argument ensued but today I want to suggest that Luce never made such a claim and by now has repeatedly told us that her view is that there is in fact no hard line between cis and trans. This is what she did say:

“Trans* goes through the heart of cis – hence my infinite question: “what does it have to do with you?” At the same time, she adds that it would be too simple to resolve all differences in a forced attempt to forge a happy cis-trans wonderland, the same tension that seems to want to falsely respond to ‘black lives matter’ with ‘all lives matter.’

Our intention is to bring the spontaneity and intellect of the unbehagen saloon to bear and the question of trans. What we are not doing is hosting a conference after months of soliciting papers and choosing the polished productions of experts preparing for further publication in journals and books. We are hosting an encounter, two weeks after the thread emerged. The thoughts will be frantic, half baked, unformed, fragmentary and maybe confused. Intentionally. We need your help to think and work with us.

We don’t want to ask the same questions in the same way that everyone else does. We don’t want to turn our clinical gaze to the new fascinating other nor do we want to start from the perspective of a clinical theory on trans mediated by any familiar lens, be it Lacanian, Kleinian, relational or otherwise. We wanted in fact to instead turn our attention to the fascination, discomfort and contention that seems to attach itself to this conversation. We want to ask about this urgency and not naturalize or explain it away. We want to ask why we are effected in the way that we are. We are told that this is a hard conversation to have, that it creates a sense of the superego at large, judging, that we will never get away with it. We ask if it is possible to speak about transphobia in a non-phobic way. We are told that we can’t and we won’t.

Griffin Hansbury has thought long and hard about the way that transphobia manifests when it does. Griffin never says that every reaction is necessarily phobic nor does he deny that an analyst can have the full range of countertransference feelings to a trans patient. What I think he is saying, which is obvious, is that trans phobia exists and it might be possible to say something about that. Why this seems to be so hard to say is itself hard to say but again, we will try.

Outline of the evening. After Luce and Griffin present, Tracy will offer her reflections, written after surgery with the wrong arm on too much or not enough pain killers, while calling up long forgotten memories of gender theory and gay activism in another ACT UP life. I want to say that I appreciate how Tracy is following our wish to turn the gaze of the analyst back to themselves tonight through a deeply personal confrontation with her own ghosts of gender past.

Following our panel we will devote the rest of the evening to discussion with our audience.

Luce deLire connotes a cloud of identities, posing in different time zones between the lines as a simulacrum, a philosopher, time traveller, organizer, astronaut, curator, makeup amateur, publisher and collector of your poetic accidents. She is a PhD candidate in philosophy and German Literature at Johns Hopkins University. 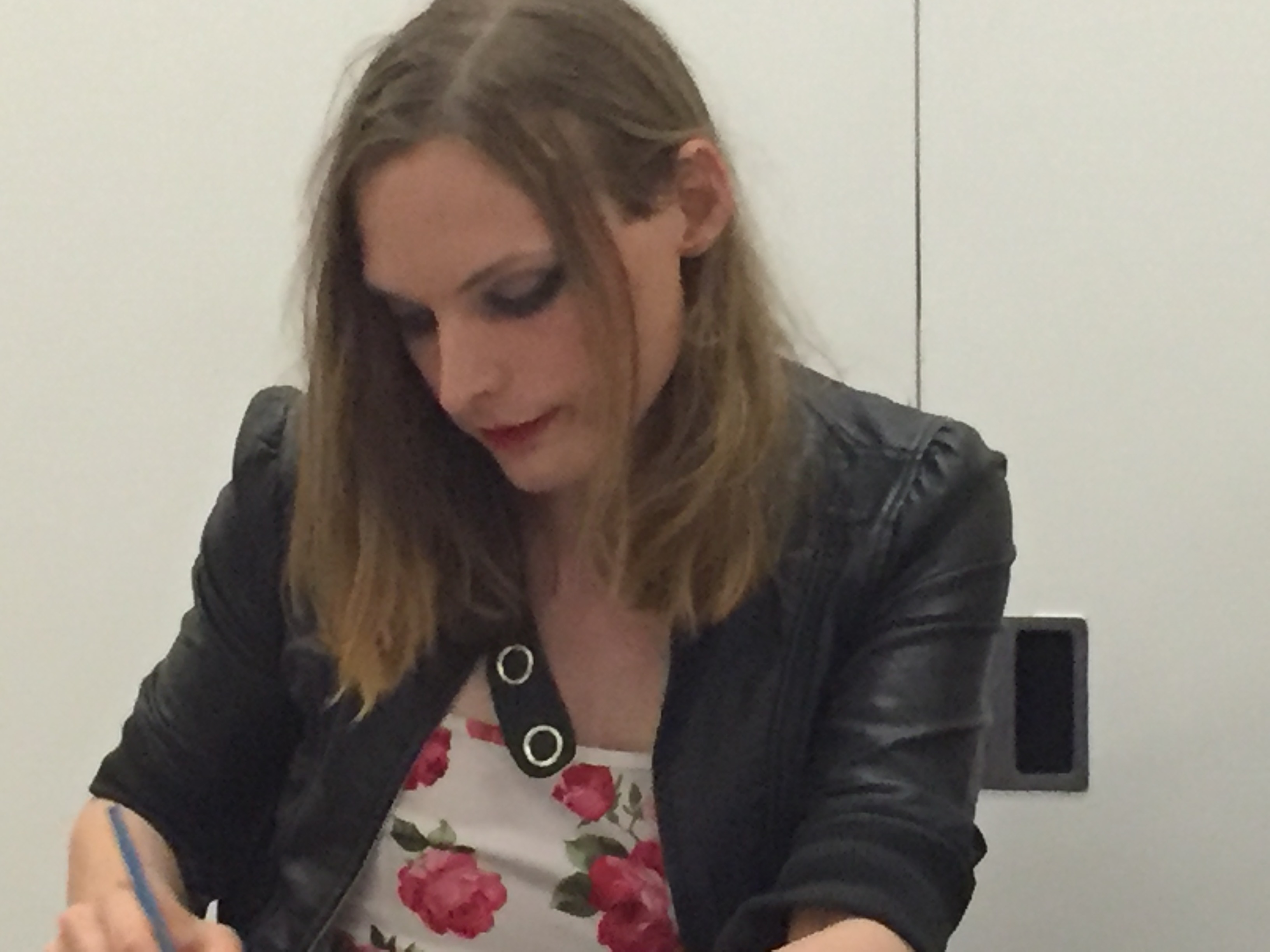 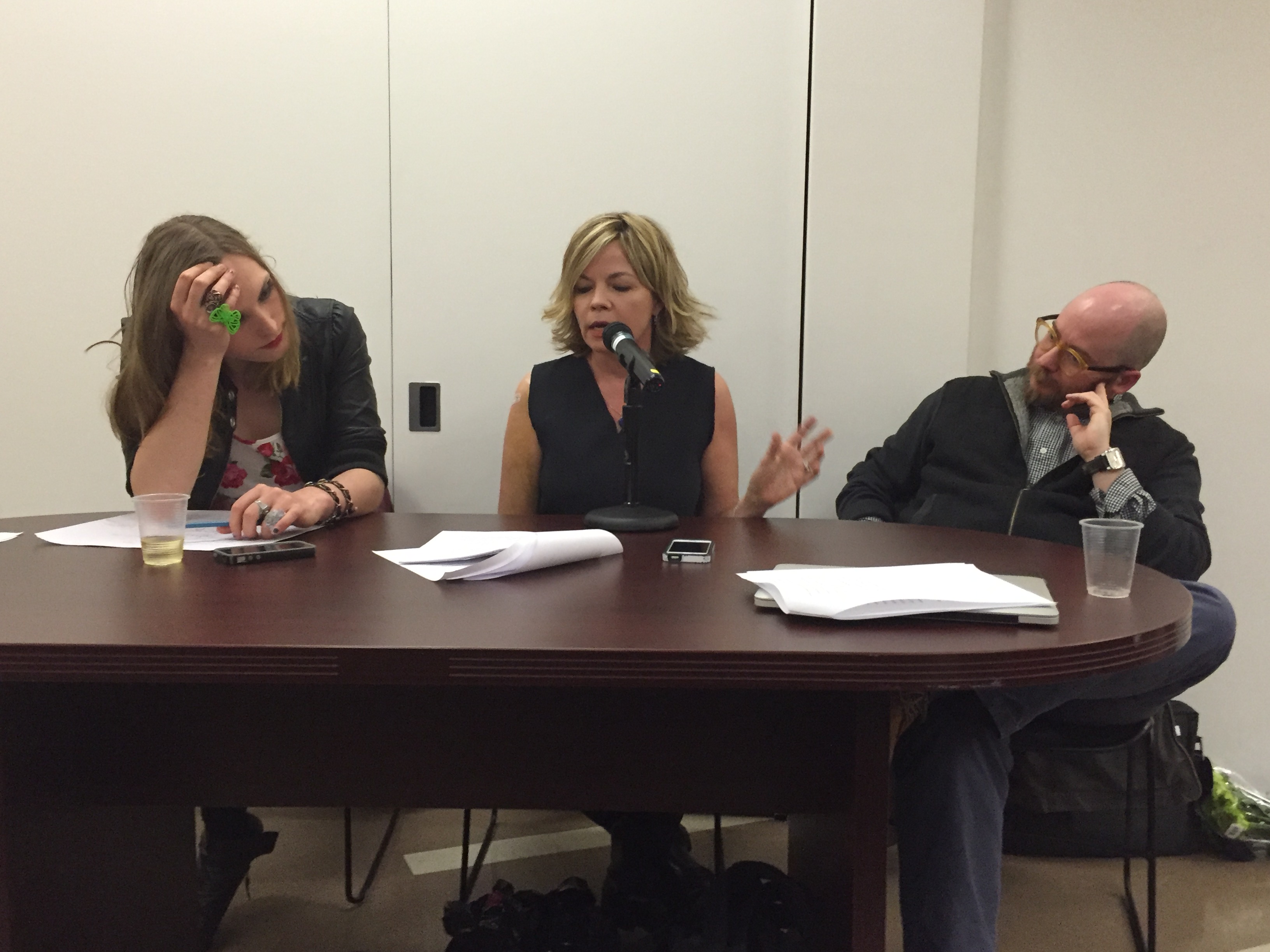 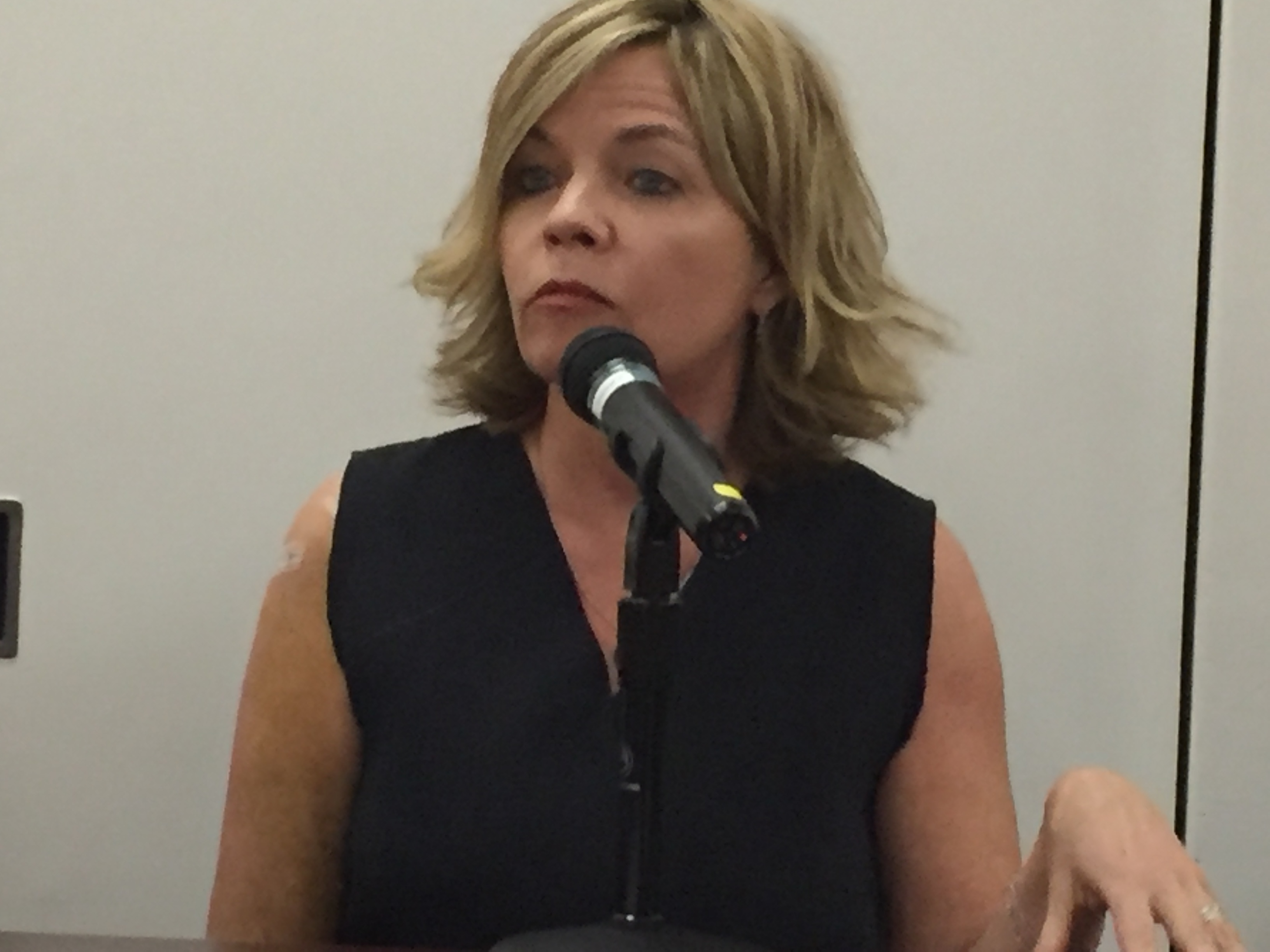 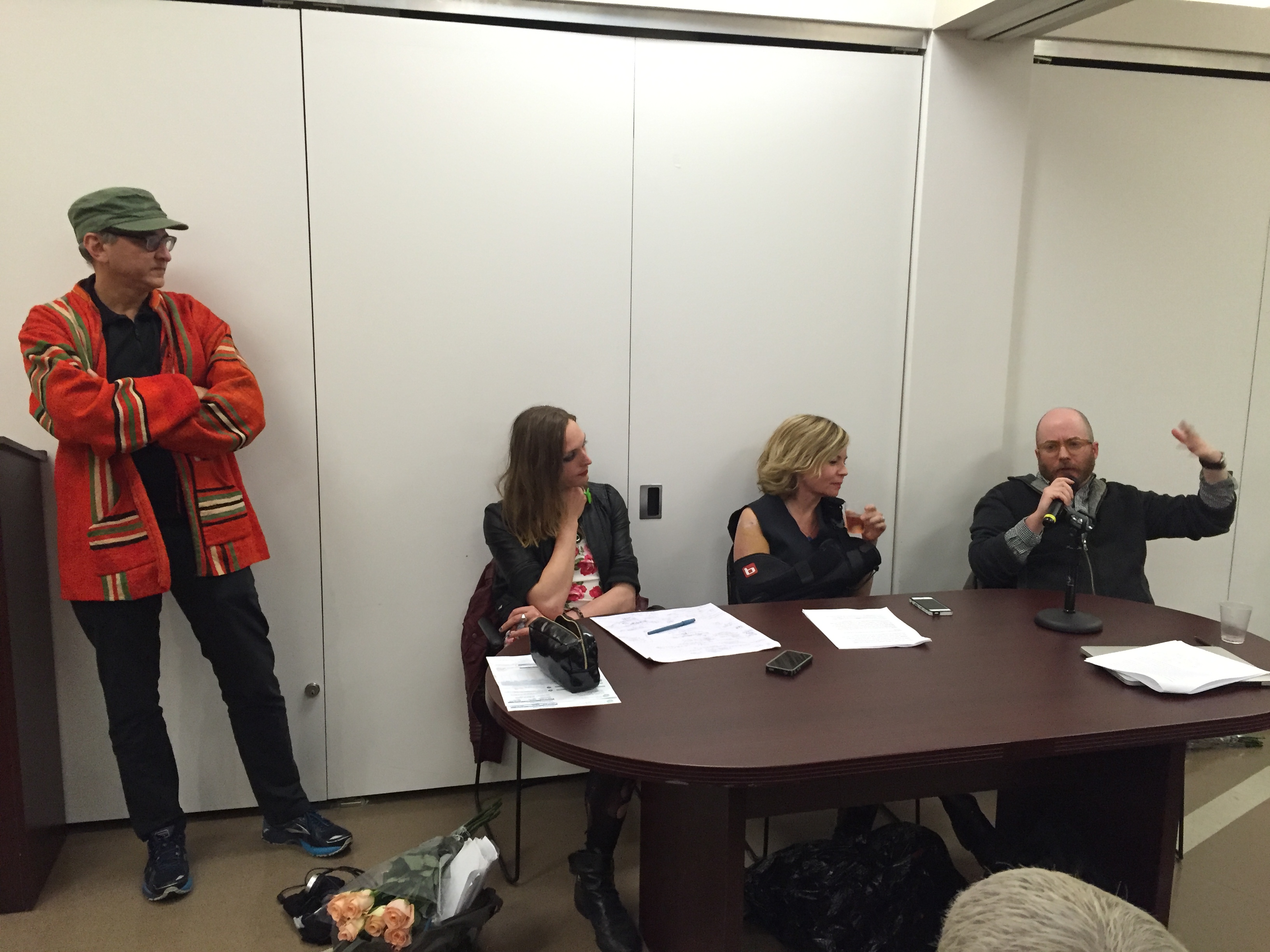 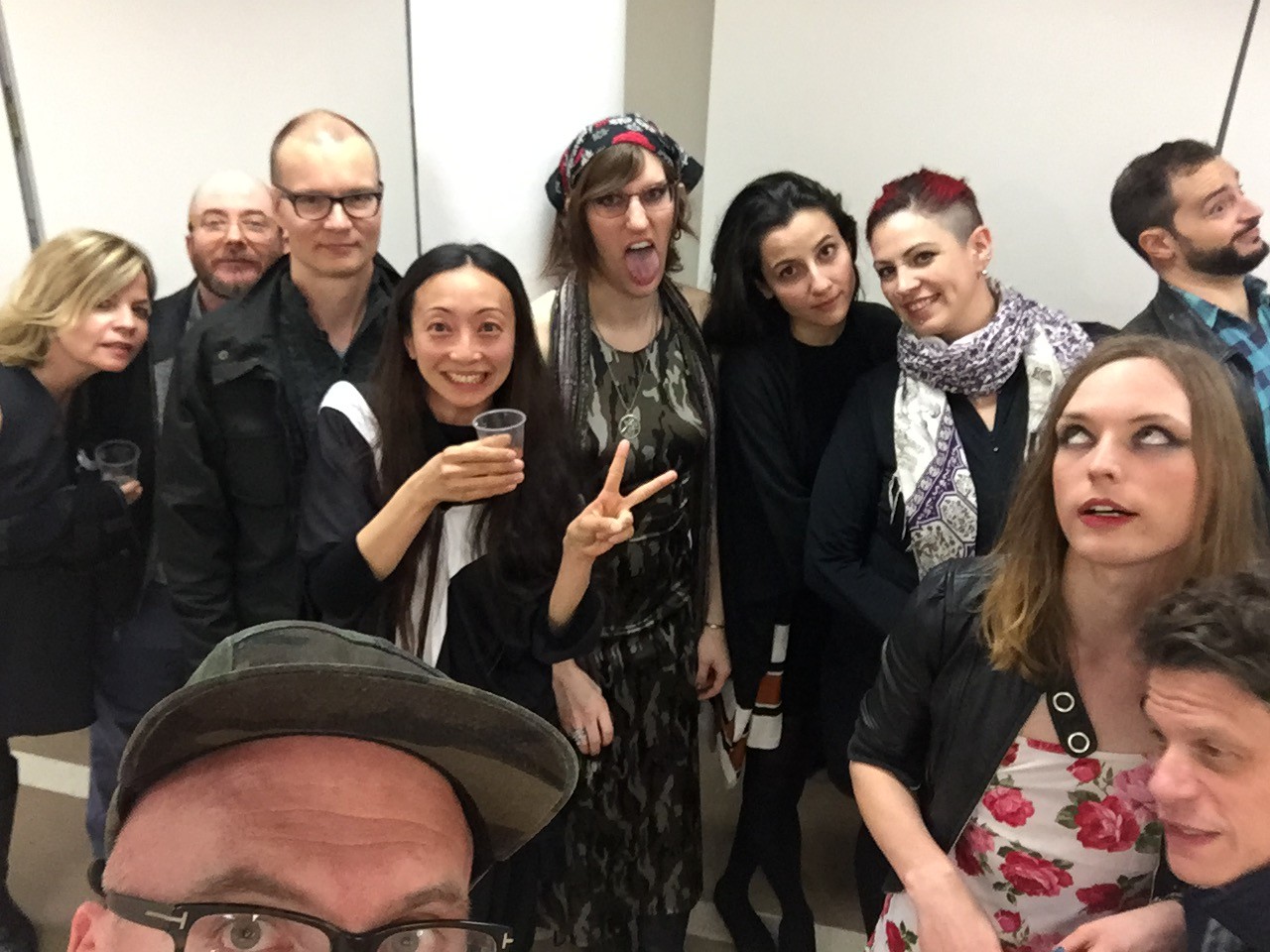