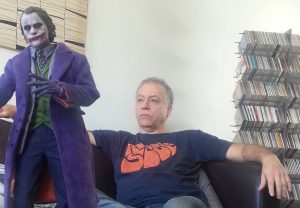 No mere bomb cyclone could keep the Unbehagen from coming out in force for today’s day long Jouissance event featuring Brazilian analyst Ricardo Goldenberg. A fine day was had by all though Jouissance as such was had by none. By this I don’t mean to insult Ricardo but on the contrary to pay careful attention to one of his key points – jouissance is not something that I have or that you have. I cannot speak of my jouissance or how you experience your jouissance, according to Ricardo. Why is this? Because jouissance is always jouissance of the Other.

Ricardo began by speaking of the sort of reading – or misreading – that he practices. In his thinking, misreading is not a pejorative term. He follows Harold Bloom in his writing on misprision, bringing this back to psychoanalytic theory to form a theory of psychoanalytic transmission by readings that are misreadings.

Goldenberg then set out a polemic against a certain way or reading Lacan that he identifies with Jacques Alain Miller. JAM is in his estimation a version of a new kind of naturalism – albeit one grounded in a certain insistence on the Real in late Lacan as the culmination and surpassing of the middle phase Lacan that is characterized by his attention to the Symbolic. What he rejects is the narrative by which late Lacan represents either a grand culmination and synthesis of all that came before or alternately one in which the late Lacan can be see as making a radical break with all that came before in his own teaching.

Instead, he sees Lacan as radical in the sense that the radical is one who takes something to ‘its last consequences.’ Goldenberg’s maintains a rigorous adherence to his stance that the speaking being can only experience via language. He later explicated his distinction of sign and signifier in describing how the signifier is something that is formed under conditions of analysis under transference. His practice and theory therefore always involves reading the real in light of the symbolic.

After a lunchbreak, Manya Steinkoler provided with all of her usual verve and jouissance – oops, I cannot say that! But jouissance there was in this case which involved talk of walking, staying still, stagnating, seeing. When all was over and we retreated to another glass of wine, someone (i think Emma) said, but wait, we forgot to connect the case with jouissance! But perhaps there was jouissance aplenty in all that was said about all that was hard to say, all that was perhaps almost ready to be said, and all that might soon be said and held as signifier in relation to a jouissance that belongs to no one. I did find the very clear direction Ricardo gave as to how he would proceed quite helpful. Sadly we cannot share the discussion of the clinical case.

We are grateful to Eliana Caligaris for organizing this, to the fine citizens of Charlton Street for hosting, for all who responded to the call to come out on one of the coldest days in recent memory and who shared their conversation and questions.