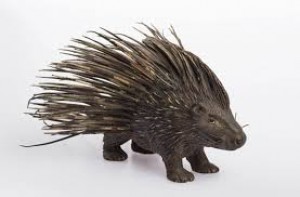 As an extra credit assignment following the Angelo Villa talk, Cecilia Wu and I became interested in the porcupine parable from Schopenhaeur that Angelo Villa offered towards the end of his presentation. Angelo used the parable to address the question of  how a group might survive its narcissistic and hysteric tendencies, its craving for leadership and its hatred of leaders, its belief in democracy in the face of the reality of inequality and its tendency to propagate itself on fumes of unanalyzed transference to mischievous effect.

We became curious about the porcupine parable.  A random google using keywords “Freud porcupine” revealed a whole teeming history of Freud andporcupines that amazed us and led us to weeks of porcupine research that we now share with you.  Of course would be glad to receive your resonating quills in response to any of our findings, but in any case we hope you will enjoy, in fact we command you to do so.

Without further ado here is the parable:

The Porcupine Parable:
“On a cold winter’s day, a group of porcupines huddled together to stay warm and keep from freezing. But soon they felt one another’s quills and moved apart. When the need for warmth brought them closer together again, their quills again forced them apart. They were driven back and forth at the mercy of their discomforts until they found the distance from one another that provided both a maximum of warmth and a minimum of pain. In human beings, the emptiness and monotony of the isolated self produces a need for society. This brings people together, but their many offensive qualities and intolerable faults drive them apart again. The optimum distance that they finally find that permits them to coexist is embodied in politeness and good manners. Because of this distance between us, we can only partially satisfy our need for warmth, but at the same time, we are spared the stab of one another’s quills.”

and now on to the history lesson:

Few know that back in 1909 Freud briefly tried his hand at New Age self-help catchphrases, but indeed it was Freud who came up with the idea of “finding your porcupine” as a technique in the face of anxiety.   Background: After his invitation to speak to scary Americans about psychoanalysis at Clark University, Freud unveiled this notion to his inner circle, further explaining that it means that when one is anxious about something, one should transfer the energy of anxiety onto another substitute notion.   Freud implies that rather than dwell on jitters about going to America, he came up with the notion that he would hunt and find a wild porcupine, an animal he had apparently heretofore never seen.  Here is Freud’s formulation by which he invented his scheme of ‘finding your porcupine’ :

“Whenever you have some large objective in mind, it’s always good to identify a secondary, less demanding goal on which to focus your attentions in order to detract from the anxiety associated with the search for the true grail.”  (S. Freud)

Our crack Research and Investigation Unit scoured the historical records to establish the following chronology of Freud’s ongoing relationship to theporcupine:

1)After the Clark University talks, while walking in the woods near Lake Placid with his American hosts, he finds his porcupine.  It seems he follow his nose in relentless pursuit of a fetid trail leading finally to his prize and trophy, a wildporcupine, albeit dead and smelly.

“He had been told that the hike to the porcupine’s lair would be quick and gentle. It was long and grueling. Jung flirted with their guides to appalling effect the whole way. At last, the girls said, they were nearing the spot. A strange odor began to waft through the air. It grew worse. Became fetid. One girl suggested they switch course so as to be no longer directly downwind of the stink, but Freud refused to swerve. Having been hauled off on this mission, he would make no concessions to the niceties of female nostrils. The smell grew more vile still—became unbearable—and then, suddenly, there it was. They had found the porcupine. Or rather the bloated carcass of a porcupine, swarming with flies. After a pause, Freud walked up to the body. He prodded it with the tip of his gold-head cane, then turned back to the others. “It’s dead,” he said.”

2) Freud’s porcupine mania is enshrined in a brass porcupine souvenir, given to Freud by his American host James Putnam at the end of his successful Clark University trip.  He loves his brass porcupine very much.  It sits to this day on his desk – see picture below.

3) In 1910, Freud tells Jung in a letter that he has found another love object to replace the porcupine – a bonsai tree or as Strachey dubs it a “Japanese dwarf tree.” The porcupine still sits on the desk in the Freud Museum to this day, so we can only conclude that Freud stopped loving his porcupine and replaced it with the love of the little tree.  (“Since I must always have an object to love, the porcupine has been replaced by a charming Japanese dwarf tree, with which I have been sharing my study since Christmas.” Freud letter to Jung)

3) In 1917, Ferenczi attempts to renew his faltering flame with Freud by way of a memento: an iron porcupine sent by post.  He teases Freud with this:  “Please write when you receive a bronze animal,  that is of special interest to us, which i have sent you.”  Freud does dutifully then reply:  “Meaningful porcupine arrived today undamaged.”

Cut to 1921 and we find Freud quoting the Schopenhauer metaphor in his Group Psychology book. (“Let us keep before our eyes the nature of the emotional relations which hold between men in general. According to Schopenhauer’s famous simile of the freezing porcupines no one can tolerate a too intimate approach to his neighbour”)

Our Research and Investigation unit then met with our Deep Analysis unit to formulate the following:

Tens Truths of the Porcupine

1) The Porcupine Parable is a kind of philosophical currency that gets passed from person to person.   Schopenhauer passed it to Nietzsche. Wittgenstein loved it.  By and by it came to Freud who mentions it in his essay on Group Psychology.   George Prochnik later wrote an article metaphorizing the porcupineas a stand-in for Freud’s relation to America. And now Angelo Villa has brought us the porcupine parable too.

2) The porcupine parable always gives the appearance of giving some kind of truth or wisdom regarding group psychology, however, the parable seems to constantly be reinterpreted by each author.  After all these interpretations, the parable finally seems to stand for nothing more than the desire of each writer to convey some ideal wisdom about human group behavior.

3) The Porcupine Parable obeys the law of substitution.  When speaking of theporcupine, one is always speaking of something else.  Freud begins by saying that the porcupine is a purposeful decoy, a substitute for something else – another anxiety.

4) However, by returning to the porcupine in his Group Psychology, Freud complicates the meaning of the porcupine.  At first, “finding one’s porcupine” is what Freud thinks about in order to not think about the potential hostility of a group of foreigners listening to his psychoanalytic ideas.   But then, in Group Psychology, the porcupine stands for the inevitable hatred of man for his neighbor after all.  The porcupine is both that which allows one to tolerate the foreign other and that which stands for the impossibility of tolerating others.

5) Freud’s porcupine begins and ends with a substitution.  First, porcupinesubstitutes for anxiety.   Later, the porcupine is traded for a Japanese dwarf tree since, as Freud explains in a letter to Jung, he must always have a new love object.   The meaning of this letter to Jung regarding the porcupine as love object exchanged for the dwarf tree is radically uncertain.   First of all, do we accept that Freud ever loved his brass porcupine or do we assume, according to Freud’s own logic, that when he speaks of this porcupine love he is really speaking of something else altogether – likely a foreign object of anxiety?  We are left unsure if he ever loved the porcupine, if he does in fact love the dwarf tree and most of all, we are left unsure what is really being passed between Jung and Freud in this exchange.

6) George Prochnik’s 2007 article in Cabinet “The Porcupine Illusion”  further propagates the porcupine parable as a metaphor for Freud’s vexed relationship with America itself, for Freud a place that is immensely coarse and money obsessed and yet the a place that embraced him while his homeland held him in some contempt.

7) We resist all such attempts to domesticate the porcupine into local meaning zoos.   The porcupine tells you what you want to hear, it convinces you it hold the eternal truth to mankind in its quills.

8)   We did some research on actual porcupines and found the one thing you would want to know.  How do they do it?

“Porcupines mate in a very bizarre way. They first begin their ludicrous lovemaking with some nose rubbing. If the female accepts the nose rubbing and, after the initial nose rubbing test, the female is still keen on the male, the male will then stand on its hind legs and the female allows him to urinate all over her body.

9) The American porcupine sits on the Freudian desk in the Freud Museum till this day.   The Ferenczi porcupine, that Freud dubbed the “meaningful porcupine” is nowhere to be seen.   What then is the meaning or meaningfulness of theporcupine or the parable? The porcupine appears to be a master signifier that quills together multiple vectors of transference goo with illusions of meaningful lessons to be learned, an Aesop’s fable that no philosopher or analyst can resist, or so it seems and so it is passed from prickly hand to hand from generation to generation.

for the Research and Investigation unit,