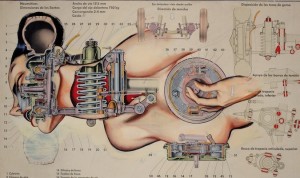 Schreber does not stop triggering transference.

The Memoirs of My Nervous Illness, published in 1903, drew Jung to draw Freud’s attention to it, leading the latter to write his “Remarks on an Autobiographically Described Case of Paranoia” (1911)—and since then an ever growing textual network of writing, speaking, and gesticulating, is thinking psychosis and practicing its language with Schreber and schreberisms in mind. This seminar will be devoted to reading selectively the Memoirs themselves, Freud’s “Remarks” and Lacan’s “On a Question Preliminary to Any Possible Treatment of Psychosis.”

Approaching such a voluminous and demanding corpus in a condensed manner might allow us to perceive more clearly how, in each of these instances, the effort is made to respond to madness with both form and formalism: linguistic invention, grammatical-logical formalization, and mathematization. The wider Schreber text teaches us about a formalistic drive. My hypothesis will be that this drive can be set into a relation with the knotty question of “transference and psychosis” and lend itself to a discussion on how to keep this question vital both in clinical work and theoretical propositions.

If we go back to the first class, the question of the miracle of speech and the gap that must be crossed- asking what it means to speak about another without insult, accusation, assumption, and yet speak to some mysterious connection- raises a profound question about address and speech in psychoanalysis.

Marcus then linked this question of speech to the problem of writing. Schreber has to write for the future, or indeed for his wife, to explain something specific about his place in the world, his relationship to history, to what has happened to him. Testimony of sorts that is careful and even ethical in its concerns.

How is it that a psychotic memoir explains more delicately the conundrums of any psychoanalysis? This, I have been trying to wrap my head around. It makes me uneasy.

Second class- the question of the wound, cut, mouth, writing, wish, transference, which threatens to devolve into a competitive field… One that seemingly only Schreber wishes to avoid, while Freud and Jung and Flecsig and the others duke it out. Here there is also a fascinating question of homoerotic rivalry vs transsexual jouissance. Transsexuality seems to be about a kind of relationship to others and to the body that is not some failed Oedipus, or even negative Oedipus, but actually a return, or evocation, of its more primordial moment, something Marcus likened to the 1905 Freud of the Three Essays.

Marcus and I spoke briefly about the fact that in all this competition to say who was the originator, the creator, the founder of theory, only Schreber wants to be the created, to write in a way that shows what it means to be written upon. Again something that finds its echo in his trans sexuality.

Last class- the challenge to classical forms of interpretation seems to be real and urgent. Psychologizing the field with ideas of projection, so much rationalization, creates a competitive dyad like the lower and upper gods and their trumping of one another, their using the language sensitive birds for their own ends, as opposed to what is so lovely in these birds- the sensitivity to language, to homophony, to play, surprise, and just being there in that. Perhaps it also destroys contingency. Perhaps it is the speech of fleeting improvised men that Schreber is looking for a solution to.

If we take this a bit further to what was the most fascinating but difficult in the talk – there is the idea of a field that is organized around an ambiguous point, something named, but which abolishes itself, and renders the field asymmetrical. This is Freud’s description of paranoia and libido theory. Language and libido unite in something like a theory of the letter- the primal moment that is the support of language and its undoing. A place where difference, as a general notion, but one that also speaks to gender, is thrown into question.

The consequences of this for psychoanalysis are vast. Especially when considering what a transference process aims at- interpretation? Inscription? Construction? Reconstruction? Creation from nothing? Continuation of created? These are the theological stakes of Schreber.

If I was going to fast forward, anticipating the last class on Lacan, there is an intense opposition between this self abolishing support and the name of the father/phallus. Does one cover the other? Or is the phallus just another name for something that abolishes itself in the end anyway?