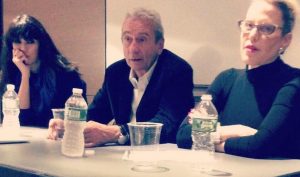 Jamieson started with a message of discontent aimed at the discontents from part one of the Marc Strauss miniseries following Kelly Merklin’s admirable presentation. To those who seemed disturbed by the idea that Kelly’s patient was a (Lacanian) psychotic, she offered that even if we think this is suspect, we should appreciate such a clear and exemplary formulation. If we want to contest this formulation of psychosis, we would have to contest it on its own terms and show how its logic falters and how a logic of continuity could justify itself against the Lacanian model.

In the same vein, Marc Strauss began by directly addressing the objection that Lacan does not allow any continuum from psychosis to neurosis. Nevertheless, he tipped his hat to a Lacanian version of continuum by which it is possible to say that we all have a kernel of madness – and in that sense there is madness for all, including the so called neurotic.

Why is that the case? The madness he means is that specifically contingent, random, idiotic signifier that each forms by which he or she “gets off.” Importantly, this kernel is not something that is subject to interpretation. In itself it is not fantasy and so we cannot analyze or “read” it as we read the chain of signifiers that together forms a scene of fantasy. The difference in diagnosis is how each responds to this mad kernel. The psychotic through a more autistic certainty, the neurotic through a questioning of the other. The neurotic is looking for ‘it’ – that elusive kernel that escapes in the being subject to language. The neurotic asks ‘is this it?’ while the psychotic asserts IT IT IT, with no arguments allowed.

The Name of the Father comes into play in neurosis to organize the signifiers under the unity of a singular presence by which the other chain of signifiers can be brought into relation with each other, relations that permit substitutions: this for that. Psychosis has no substitution, just a series of signifiers. The psychotic hops from one to the other.

The Name of the father ‘regulates the presence and absence of a mother.’ By the way, I think that this might be the logical point where we could contrast this model of discreet structures that logically don’t allow for a continuum with Klein and Bion. Bion after Klein will not say that the difference between psychosis and neurosis is the presence (or absence) of a mother. Rather they seem to say that the difference is the resistance to forming the image of the mother as a whole object. Therefore the movement from psychosis to neurosis follows the ability to withstand ambivalence and form a whole image of mother, to construct a wholeness from the parts, even though that means accepting the aggression of the mother and towards the mother etc. So there!

The second part of the talk moved toward formulas of sexual difference.
We heard the difference between the phallic jouissance and the feminine jouissance and asked if following Lacan there are not two species of beings, each with their own jouissance.

We heard some discussion about the ever present Harvey Weinstein (Manya cautioned non americans that this is not to be pronounced Vine-steyn as if he were a Germanic Thinker like Wittgenstein).

There was much much more on this but I plead exhaustion and bid you listen to the recording, made on my own personal object a, which usually can be found in my pocket, otherwise known as object Iphone. For, as Marc reminds us, the psychotic carries the object a in his pocket.

In the discussion, I raised a question about the seeming resemblance between Phallic Jouisance and Neurosis. Where both feminine jouissance and psychosis are outside of the One that organizes the whole. Emma Lieber followed with a nice clinical question and example and we finished with more questions and the inevitable Harvey Weinstein reprise.