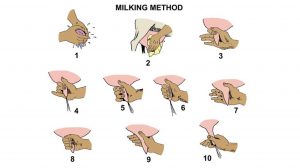 Milk that Goat – An Essay Film by Luce deLire

The project: In a curious passage of his analysis of the memoir of the psychotic Daniel Paul Schreber, Sigmund Freud quotes Immanuel Kant as follows:
“In Schreber’s system the two principal elements of his delusions (his transformation into a woman and his favoured relation to God) are linked in his assumption of a feminine attitude towards God.
It will be an unavoidable part of our task to show that there is an essential genetic relation between these two elements. Otherwise our attempts at elucidating Schreber’s delusions will leave us in the absurd position described in Kant’s famous simile in the Critique of Pure Reason—we shall be like a man holding a sieve under a he-goat while some one else milks it.“
Freud, CW XII, p.34 (german: Sigmund Freud, GW IIX, p. 268)

The passage in Kant looks like this:
“One great proof of intelligence or insight is knowing what questions it is reasonable to ask. For if a question is intrinsically absurd and calls for an answer where none is needed, then it brings shame on the questioner and misleads the incautious listener into absurd answers, so that the whole scene is (as the ancients said) of one person milking a ram while the other holds a sieve underneath.” (Immanuel Kant, AA III, p. 79)

This film is a reflection on this unlikely encounter.
Many thanks to Evan and Marie who encouraged me greatly – I love you.