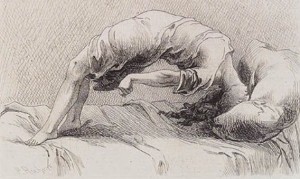 “Conversion is linked to combustible effects, to desires and fears that remain hidden, unspoken, but ripe, a demand that takes place through the body. This is certainly the situation with the original “conversion hysterics” of psychoanalysis. “I have a sounding board in my abdomen…if anything happens, it starts up my old pain,” said a woman to Breur in Studies in Hysteria (1895, p. 204). Some thirty-odd pages later, Freud takes over, as he would do, this hysteric’s imagery as his own, laying down the foundation for the existence of “unconscious ideas” and the “splitting” of the mind on the basis of her words. Freud writes, “the lively affects into which they are thrown by relatively trivial causes become more intelligible if we reflect that the ‘split-off’ mind acts like a sounding-board to the note of a tuning fork.” Conversion hysteria is an act that preserves some part of your psyche or emotional life in the body, not allowing it to undergo the usual wearing away.

These women’s bodies and personalities move in concert — Breur and Freud describing them as lively, restless, intolerant of monotony, volatile, and impressionable. The unity of soma-psyche in conversion hysteria provides Freud, paradoxically, with a model of the dis-unity of the human mind. Or perhaps better, this logical ordering of their disorder provides Freud with a similar psychological theory. Breur and Freud followed the signals on their body from strange paralyses and pains, blackouts, coughing fits, and the like. The goal was not simply the removal of the pathogenic disturbance in order to return to normal. Freud abandons the cathartic aim — perhaps something closer to an idea deconversion — because it doesn’t last. He must find a more radical change, leaving us with one of the greatest of tautologies in psychoanalysis: conversion must be subject to conversion.”

I wanted to take up one of the evocative points in Jamieson’s latest writing on conversion disorder. She writes:

“With so many seeking recourse to pharmacological treatments or bodily modification of various sorts, plastic and otherwise; with young men and women seemingly willing to direct violence at any-body, including themselves, in the name of powerful religious ideals.”

I wonder if we can think about her connection of ISIS and fundamentalism in general as being part of an obsession with effecting change directly on the level of the body in a way that finds a thread running from new age therapies, body modification of all kind and the obsession of the terrorist with policing the compliance of (mainly female) bodies and dismembering the bodies of those designated as alien bodies. I was taken by this article in The New York Times that offered the following as a basis for thinking about fundamentalism. We should actually find out what they do – not from our own projections but from talking to those who have been part of it. In his article “The Soft Power of Militant Jihad,” Thomas Hegghammer writes:

“For the past four years I have been studying what jihadis do in their spare time. The idea is simple: To really understand a community, we need to look at everything its members do.”

It turns out that what they do is tell their dreams to each other. Also:

“When jihadis aren’t fighting — which is most of the time — they enjoy storytelling and watching films, cooking and swimming. The social atmosphere (at least for those who play by the rules) is egalitarian, affectionate and even playful.”

“Perhaps more important than poems for jihadis are dreams, which they believe can contain instructions from God or premonitions of the future. Both leaders and foot soldiers say they sometimes rely on nighttime visions for decision making.”

Hegghammer adds that within jihad culture, men who can weep openly when filled with passion are most admired. Speaking of ISIS founder Zarqawi, he says:

“Few people in the West are aware that he also went by the nickname He Who Weeps a Lot. Mr. Zarqawi was known for weeping during prayer and when speaking about Muslim women’s suffering under occupation.”

So, if you long for a place of music, poetry, dream interpretation where men are allowed to weep and moreso are admired for it, ISIS might be for you.

While this might all seem a tangent to Jamieson’s thinking about conversion disorder, we can go back to her piece that starts by considering the word ‘conversion’ itself as a word rooted in religion. The jihadi is converted in a way that is ultimately rooted in an ideology of the body. But that ideology is filled with song, poem and dream, all the things we consider the essence of sublime advanced non brutal culture.

The key might be that the fundamentalist today who hates modern ideology is nevertheless as captive to the very same ideology he hates. As Zizek has commented, a ‘true’ religious fundamentalist is not obsessed with this world and its bodies and behavior but rather finds mystical truth in a way that is not constantly obsessed with the bodies of others in the finite ungodly secular world, in a way that sustains itself in its own unworldly theology.

Here is the full article from The New York Times on ISIS, dreams, and crying men:

Click here to read “The Soft Power of Militant Jihad” by Thomas Hegghammer in The New York Times, 12/18/16