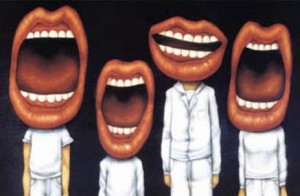 DU tends to forget itself, which isn’t a bad thing. And the idea of DU, and its various allegiances, shift and grow and mutate which is a small miracle in often stuck communities. There are a lot of new people on the list serve, people who haven’t attended events, people who only know one another virtually, which is also a new situation.

It is something of this new culture which I think creates tension on the list serve and a growing rhetoric of splitting- academic v clinical psychoanalysis, affects v language, interpretation v relationship, intellect v feeling, Lacan v everyone else.

Personally, I think these are false divisions- in particular the academic v clinical psychoanalysis one, which I think tends to break things down because there are some who write and teach and others who perhaps don’t as much, and perhaps because of these different engagements the discourse looks a little different. But what is clinical thinking is something else. Judith Butler for example is not a psychoanalyst, but cares about analysis a great deal, has been in an analysis and has spoken to clinicians for years, with much care and interest, Lacanians and non Lacanians, and because of this I have always thought her work was deeply clinical. It also happens to be academic which to me simply means she has a job in a university.

Badiou as well is perhaps one of the greatest readers of Lacan. And I think understands something of the event that can erupt in an analysis and change everything which is foldable with all kinds of more basic psychoanalytic ideas on slips, or enactment, or transformation. If one isn’t a reader of Badiou I can understand that it would be hard to know this apriori, and jump into the conversation. But I would never speak of him simply as an academic because his work directly engages psychoanalysis.

Last night I met with Elissa Marder, someone also who writes from her own analysis and is one of the most brilliant readers of Freud, and she was asking why it is so hard in analytic communities to have arguments? In our group SIPP- which aims at brining together those people who identify as both academic and clinicians, in whatever way they may make that identification- it has felt easier to have arguments in a fruitful way. Someone says- well the Kleianian position would be x, or a Lacanian might say Y, I’m trying to say z. Or here is one way we might think about the drive, to which someone might argue another perspective. Maybe we go back and read Freud. And then I walk away from that discussion with an idea for another paper or another way of thinking about what I do with patients to become part of another paper. But it doesn’t have to get personal or heretical. And one can give credence to other positions but that means being responsible for knowing something about them, at least, or knowing when to say one doesn’t know. If that means I am academic- then I chose the academy. I have never understood why our personal encampment as clinicians should make either speaking or thinking so difficult?

But I have lived with both experiences, also one of the reasons for DU, because speaking and thinking was feeling the most difficult in psychoanalytic institutes.

So DU- and its many invitees and conferences and courses were aimed at overcoming these divisions. Finding people who would speak across lines, and as Esther put it, listen across lines. Inviting all manner of theory. And to out this to work clinically. There was, at least historically, a stated admiration for this possibility. Which didn’t mean that there couldn’t be contention or debate- quite to the contrary- but these had to be debates of great stake and much content.

How can a list-serve, with some of its hasty responses (fine), or notes from alien corners, often courageously sent into a void, to unknown eyes (admirable), or even its tendency to joking and quips (which I personally love), and the tendency for threads to die and move on (also good to get used to), also remember itself, and remember that richness of response is most valuable?