The Late Lacan and Beyond: Advanced Psychoanalysis for Beginners (Session I) 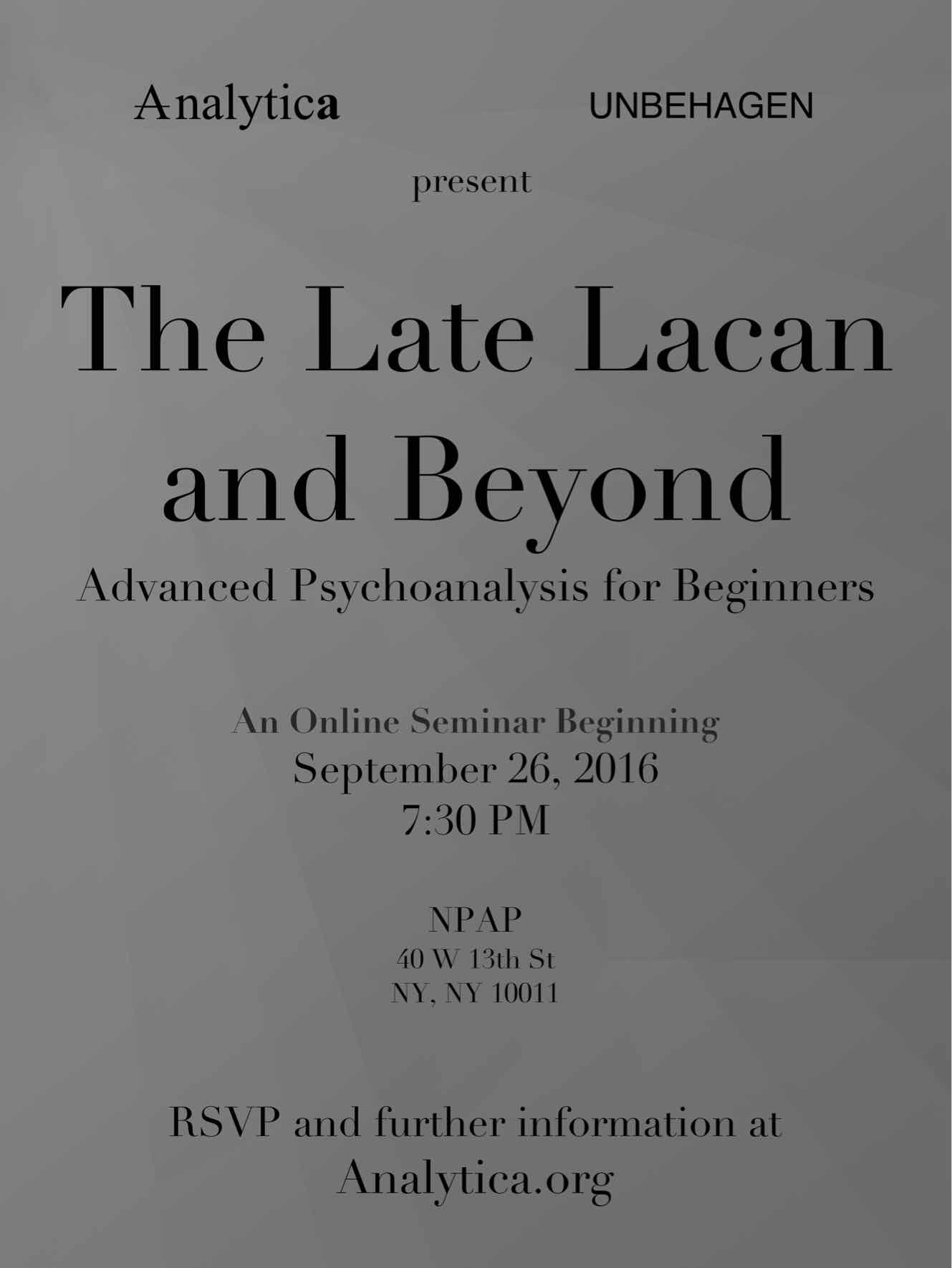 In Lacan’s last years he extended his work in psychoanalysis and put the capstone on a life of innovative practice. By now his basic concepts have been the subject of innumerable “Lacan for Beginners” books and classes while his late seminars, texts, school and clinic have rarely been explicated in French let alone in English. This event will demonstrate the significance of Lacan’s last efforts and those that have continued this work.

The seminar will serve to introduce the work of Analytica and its affiliates. It will begin with an introduction to the late Lacan and a genealogy of its descendants and will continue with an ongoing series of invited guests from the field who have extended analytic work into new forms of intensive analysis and institutional practice, especially in America.

This seminar is presented as an Analytica and Unbehagen crossover event and thus is open to the public at large free of charge as well as to Analytica members. For those who wish to attend by virtual transmission please contact the Operations Manager at info@analytica.org.

1. The myth of the short session
2. The disappearance of the couch
3. The dis-solution of the symptom
4. The re-solution of the Oedipus complex
5. Ordinary psychosis and universal madness
6. Analysis in intension and analysis in extension
7. Discourse theory beyond the 4 (+1) discourses
8. The clinical practice of topology, art, mathematics, and poetics in analysis
9. The intersection of the clinic and the school at the impasse of institutionalization
10. The use value of the cartel, the pass, the demonstration, the sclinic, the assemblage, and schizoanalysis for the future of analysis

Scott Von is a psychoanalyst and physician practicing in New York, and director of the New Clinic for Integral Medicine & Psychiatry and of the Analytica institute. He has been a member for twenty years of Apres-Coup in NY, the first Lacanian psychoanalytic institute in the US, and of Convergencia, the largest international association of Lacanian analysts. He is also trustee and member of PLACE in LA, a Lacanian analytic school and clinic, and member of Unbehagen, a free association for psychoanalysis in NY. In addition to teaching at the above institutes, Doctor Von has taught and supervised as a professor at NYU, CUNY, Pacific College, ACTCM, CIIS, Esalen and other universities and institutes on the integration of psychoanalysis, medicine, and psychiatry.