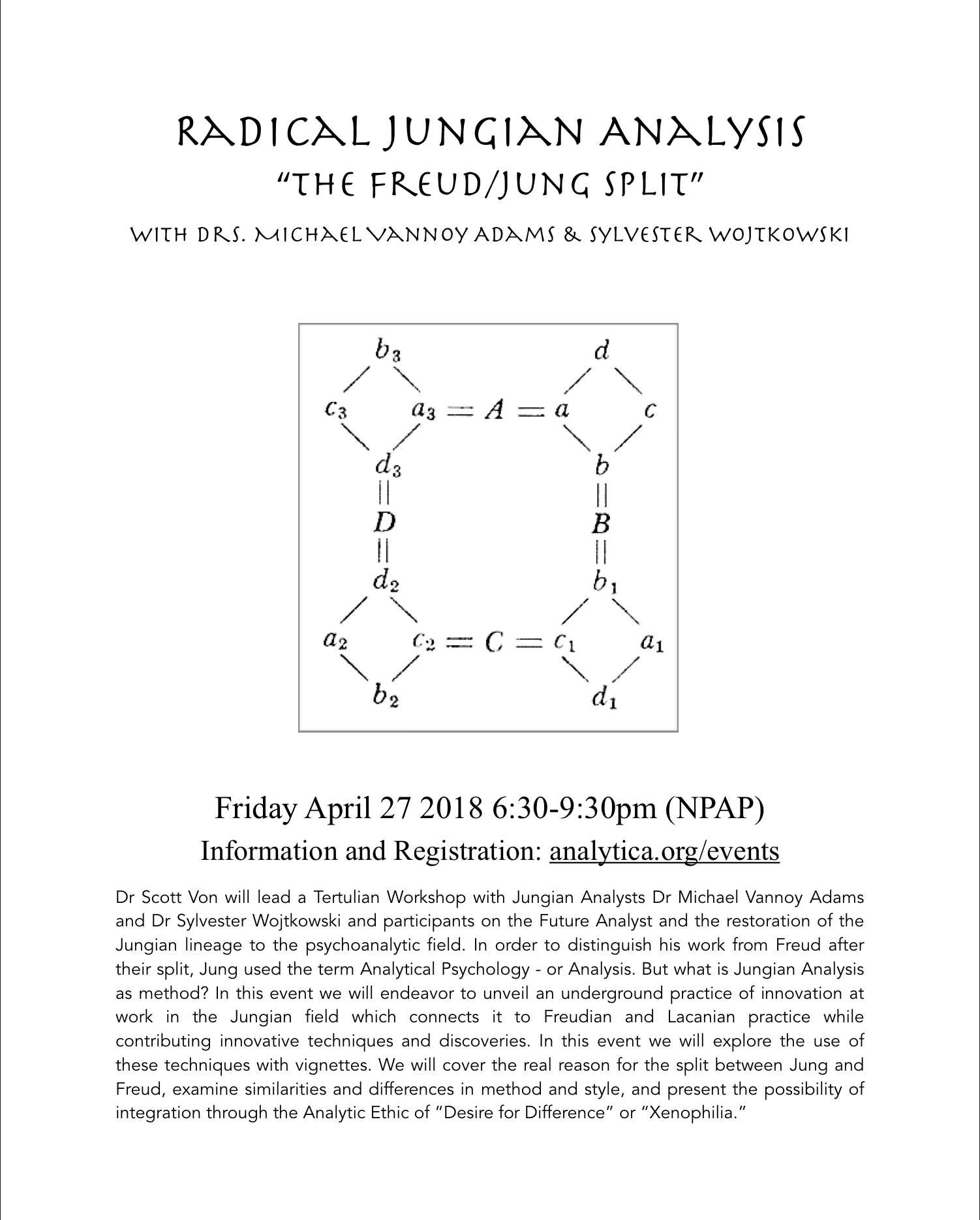 In this Seminar we take up Lacan’s late work on “Psychoanalysis in Extension” in which he tries to extend analysis from the clinic to the school and the social band – thus linking Freud’s three impossible professions of psychoanalysis, education, and politics. We will examine crucial aspects of Lacan’s Freudian School and how it gave rise to a multiplicity of other schools in its wake which carry on the transmission of a particular approach to psychoanalysis essential to our times – and the unfulfilled promise of a clinic of the Future Analyst

Psychoanalytic method and ethics is anchored by the “Desire of the Analyst”: an approach to the subject that transforms the three impossible professions of cure, transmission and polis equally with a view toward the new, different, and unique. This ethic of “Xenophilia” has profound implications for the future of the social band.

We will cover the following topics:

A. The three impossible professions of analysis in extension

Michael Vannoy Adams is a Jungian psychoanalyst in New York.  He is the author of The Multicultural Imagination, The Mythological Unconscious, The Fantasy Principle, and For Love of the Imagination. He is a clinical associate professor at the NYU Postdoctoral Program, as well as a faculty member at the Object Relations Institute and the Jungian Psychoanalytic Association. He is former professor and director of the New School Psychoanalytic Studies Program.

Sylvester Wojtkowski is a Jungian psychoanalyst and psychologist in New York. He is a founding member, supervisor, and faculty of the Jungian Psychoanalytic Association, faculty at the C G Jung Foundation for Analytical Psychology, and former lecturer at Texas University. He has published and presented internationally on subjects of Psychoanalysis and Art.

Scott Von is a psychoanalyst and physician and director of the New Clinic for Integral Medicine & Psychiatry in New York. He is director of Analytica and Trustee of PLACE Psychoanalytic Institutes, and an analyst member of Après-Coup and Convergencia Lacanian Psychoanalytic Associations. In addition to the above, he has taught and supervised as a professor at NYU, CUNY, Pacific College and ACTCM Medical Schools. He is also a poet and artist who performs and exhibits internationally on his works Autopoesis and Schizoanalysis.