MINI-COURSE: THE STUTTER IN PSYCHOANALYSIS, WITH MICHAEL G. LEVINE 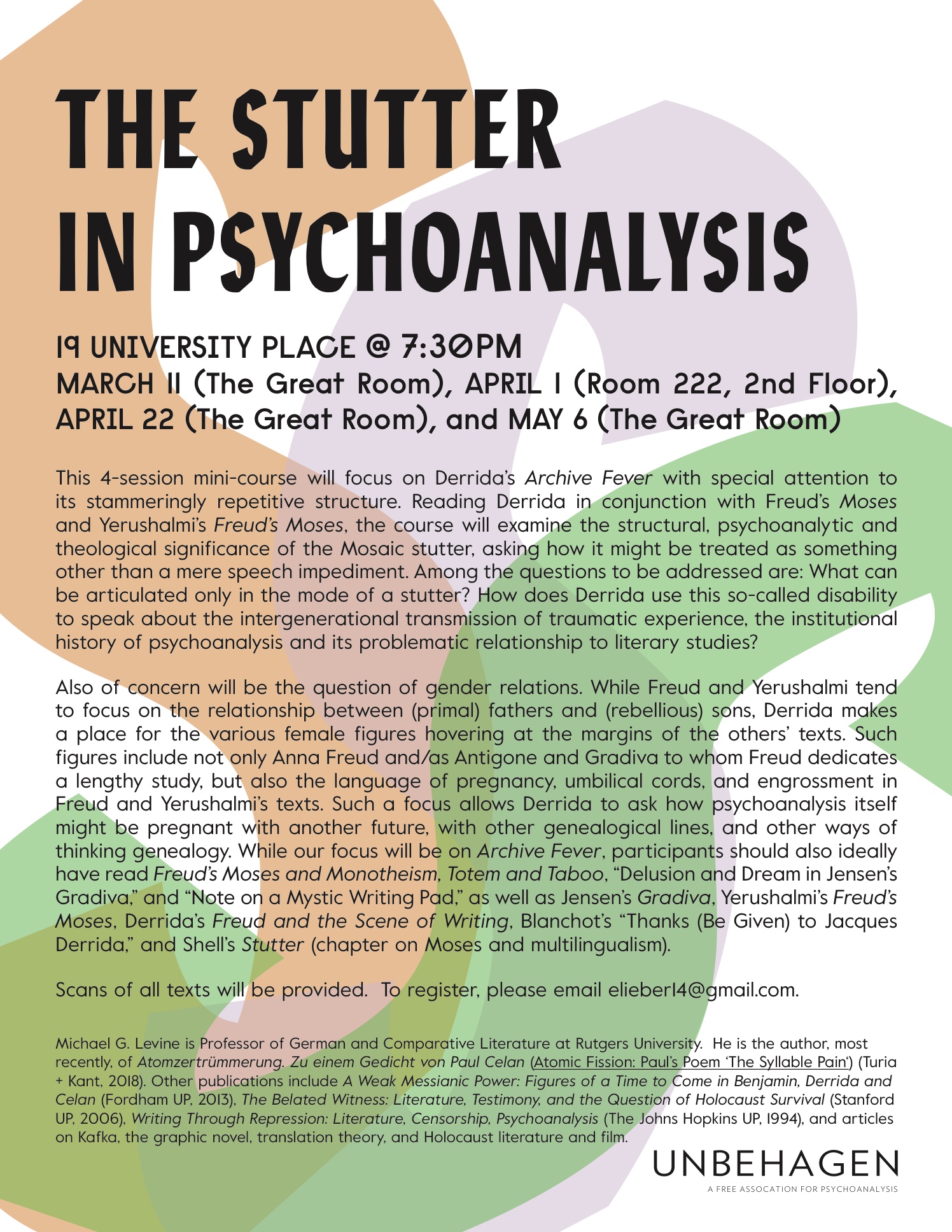 The Stutter in Psychoanalysis

This 4-session mini-course will focus on Derrida’s Archive Fever with special attention to its stammeringly repetitive structure. Reading Derrida in conjunction with Freud’s Moses and Yerushalmi’s Freud’s Moses, the course will examine the structural, psychoanalytic and theological significance of the Mosaic stutter, asking how it might be treated as something other than a mere speech impediment. Among the questions to be addressed are: What can be articulated only in the mode of a stutter? How does Derrida use this so-called disability to speak about the intergenerational transmission of traumatic experience, the institutional history of psychoanalysis and its problematic relationship to literary studies?

Also of concern will be the question of gender relations. While Freud and Yerushalmi tend to focus on the relationship between (primal) fathers and (rebellious) sons, Derrida makes a place for the various female figures hovering at the margins of the others’ texts. Such figures include not only Anna Freud and/as Antigone and Gradiva to whom Freud dedicates a lengthy study, but also the language of pregnancy, umbilical cords, and engrossment in Freud and Yerushalmi’s texts. Such a focus allows Derrida to ask how psychoanalysis itself might be pregnant with another future, with other genealogical lines, and other ways of thinking genealogy. While our focus will be on Archive Fever, participants should also ideally have read Freud’s Moses and Monotheism, Totem and Taboo, “Delusion and Dream in Jensen’s Gradiva,” and “Note on a Mystic Writing Pad,” as well as Jensen’s Gradiva, Yerushalmi’s Freud’s Moses, Derrida’s Freud and the Scene of Writing, Blanchot’s “Thanks (Be Given) to Jacques Derrida,” and Shell’s Stutter (chapter on Moses and multilingualism). Scans of all texts will be provided.

Michael G. Levine is Professor of German and Comparative Literature at Rutgers University.  He is the author, most recently, of Atomzertrümmerung. Zu einem Gedicht von Paul Celan(Atomic Fission: Paul’s Poem ‘The Syllable Pain‘) (Turia + Kant, 2018). Other publications include A Weak Messianic Power: Figures of a Time to Come in Benjamin, Derrida and Celan(Fordham UP, 2013), The Belated Witness: Literature, Testimony, and the Question of Holocaust Survival (Stanford UP, 2006), Writing Through Repression: Literature, Censorship, Psychoanalysis (The Johns Hopkins UP, 1994), and articles on Kafka, the graphic novel, translation theory, and Holocaust literature and film.