INSTITUTE NO INSTITUTE: What Makes a Psychoanalyst? 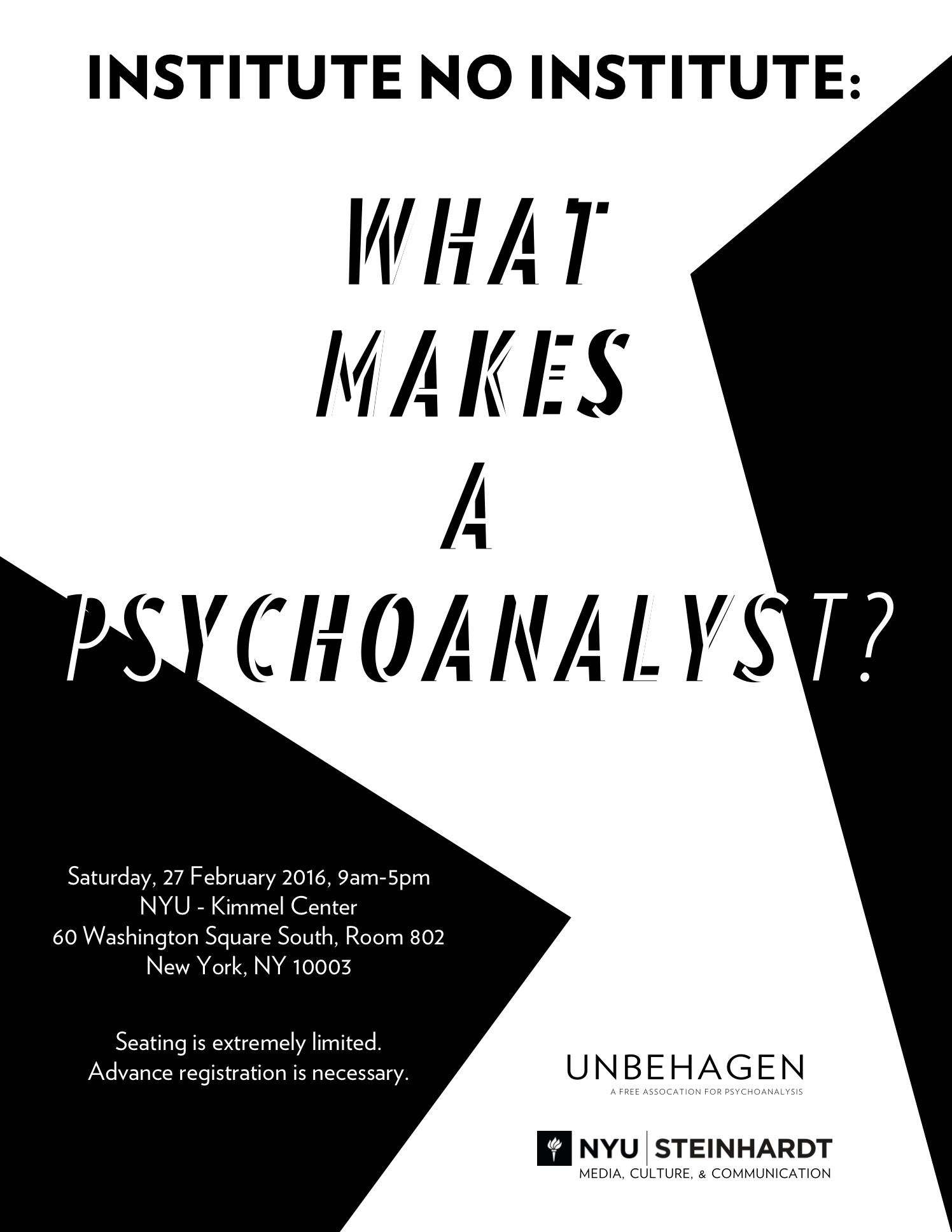 Becoming a psychoanalyst is founded upon a subjective transformation that occurs in a personal analysis. It cannot be measured or predicted, yet it is the necessary factor that allows one to conduct analytic treatment.

Neither the analyst alone nor a group of independent observers can determine its occurrence, but somehow together they may. That something so difficult to determine lies at the heart of professional transmission has troubled the field of psychoanalysis from its inception.

Institutes, schools, and broader communities of psychoanalysts have struggled to harness this transformation to formal models of training. They have invariably encountered obstacles in the structures of authority and the exercise of power. While training outside institutions is not explicitly subject to these problems, it instead risks isolation, solipsism, and the absence of an authorizing group.

What makes a psychoanalyst?
What fosters the transformative process?
Who decides if it has occurred?

Any inquiry into the formation of the analyst must face a critical tension, between the social and professional need for recognition by an analytic community vs. authorization determined by the singular effects of personal analysis, effects for which no one but the individual can account.

On February 27, we will present a daylong conference to investigate these questions. We will start with a historical overview of analytic formation; to be followed by a series of interviews of seasoned psychoanalysts focusing on individual experiences of authorization. The conference will culminate in a panel discussion among our guest analysts that will aim to deepen the discourse on the nature of analytic formation and authorization, with a view to the future of our ‘impossible’ profession.

Click here to view or print full program as PDF

Marcus Coelen is a psychoanalyst in Paris and Berlin as well as a researcher affiliated with the Department of Comparative Literature at the Ludwig-Maximilan-Universität in Munich and currently a visiting scholar at the Federal University Fluminense in Rio de Janeio. He is the editor and translator of several books and compilations of texts by Maurice Blanchot into German including Vergehen (Le pas au-delà) (2012) and is the author of Die Tyrannei des Partikularen: Lektüren Prousts (2006).

Todd Dean is a psychiatrist and psychoanalyst in St. Louis, MO. A training and supervising analyst there, he is also a founding member of the St. Louis Lacan Study Group and a member of Apres-Coup Psychoanalytic Association. Among his recent publications are “ ‘What Does Not Change’: Technique and Effects in Psychoanalysis (Division/Review 7:20-26) and “Words, Things and the Church of Christ” (The Candidate Journal, Vol, 6). He is a senior editor for Division/Review.

Joseph Newirth is a professor at the Derner Institute of Advanced Psychological Studies at Adelphi University, in Garden City, NY where he has taught and supervised graduate students for over 30 years. He is the former director of the Postdoctoral Program in Psychoanalysis and Psychotherapy at Adelphi University. He has taught and supervised psychoanalytic candidates at the NYU Postdoctoral Program in Psychotherapy and Psychoanalysis and at the National Institute for the Psychotherapies. He has published and presented numerous papers integrating relational psychoanalysis, object relations and Lacanian theory with and clinical practice. His book Between Emotion and Cognition: The Generative Unconscious (2003) published by the Other Press received the Gradiva Prize. He is currently working on a new book: From Sign to Symbol: Transformational Processes in Psychoanalysis, Psychotherapy and Psychology which will be published by Rowman and Littlefield. His practice is in New York City.

Jeff Erbe is a psychologist at Rose Hill Psychological Services and a participating member of the New York Freud Lacan Analytic Group. He has a doctorate in clinical psychology from CUNY, a masters in psychodynamic developmental neuroscience from University College London and Yale, and completed the scholars program at the Western New England Psychoanalytic Institute. He has taught undergraduate courses on psychoanalysis and film, and Freud’s Theory of Mind: Constructions of Meaning in Psychoanalysis.

Michael Garfinkle is a psychoanalyst and clinical psychologist in private practice in Greenwich Village, New York. He is an Assistant Professor of Psychiatry at the Icahn School of Medicine at Mount Sinai, a clinical supervisor in the Departments of Clinical Psychology at the Derner Institute/Adelphi University and the New School, and a visiting scholar in the Clinical Psychology program at Teachers College/Columbia University.

Ben Kafka is a psychoanalyst, cultural historian, and critic on the faculty of the Department of Media, Culture, and Communication and New York University. He is the author of The Demon of Writing: Powers and Failures of Paperwork (Zone Books, 2012) as well as numerous articles, essays, and reviews. He sees adult and adolescent patients in private practice.

David Lichtenstein is a psychoanalyst in NY, Editor of DIVISION/Review, member of the faculty at CUNY Graduate Center, The New School University, and Apres-Coup Psychoanalytic Association.

Tracy Morgan is a psychoanalyst in private practice in NYC and creator of the award-winning webcast, New Books in Psychoanalysis. She studied Cultural History at the CUNY Graduate Center from which she holds an M.Phil., and co-chairs the Friday night lecture series at The Center for Modern Psychoanalytic Studies from which she also graduated. She is an associate producer of the documentary film Paris is Burning and co-founded FreudOutLoud, a group devoted to bringing Freud’s words to the public. Currently she is at work on a set of essays responding to Ta-Nahesi Coates’ Between the World and Me.

Jason Royal is a clinical psychologist in private practice in New York, working with adults and adolescents. He completed doctoral studies in clinical psychology at CUNY, followed by a clinical postdoctoral fellowship at Columbia University. His writing includes pieces in Division/Review and in the literary magazine The Threepenny Review, as well as a recent book chapter on the experience of doing child work in early training (ed. S. Tuber, 2015). He also holds a doctoral degree in music composition from Columbia, and taught undergraduate music courses there for several years.

Jamieson Webster is a clinical psychologist and psychoanalyst in private practice in New York. A graduate of IPTAR, she teaches at Eugene Lang College, as well as, supervising graduate students through City University’s doctoral program in clinical psychology. She has written for Apology, Cabinet, The Guardian, The Huffington Post, Playboy, The New York Times, as well as, for many psychoanalytic publications. The Life and Death of Psychoanalysis is published with Karnac (2011). Stay, Illusion! – written with Simon Critchley- is published with Pantheon Books (2013). She is currently writing a new book titled Conversion Disorder.