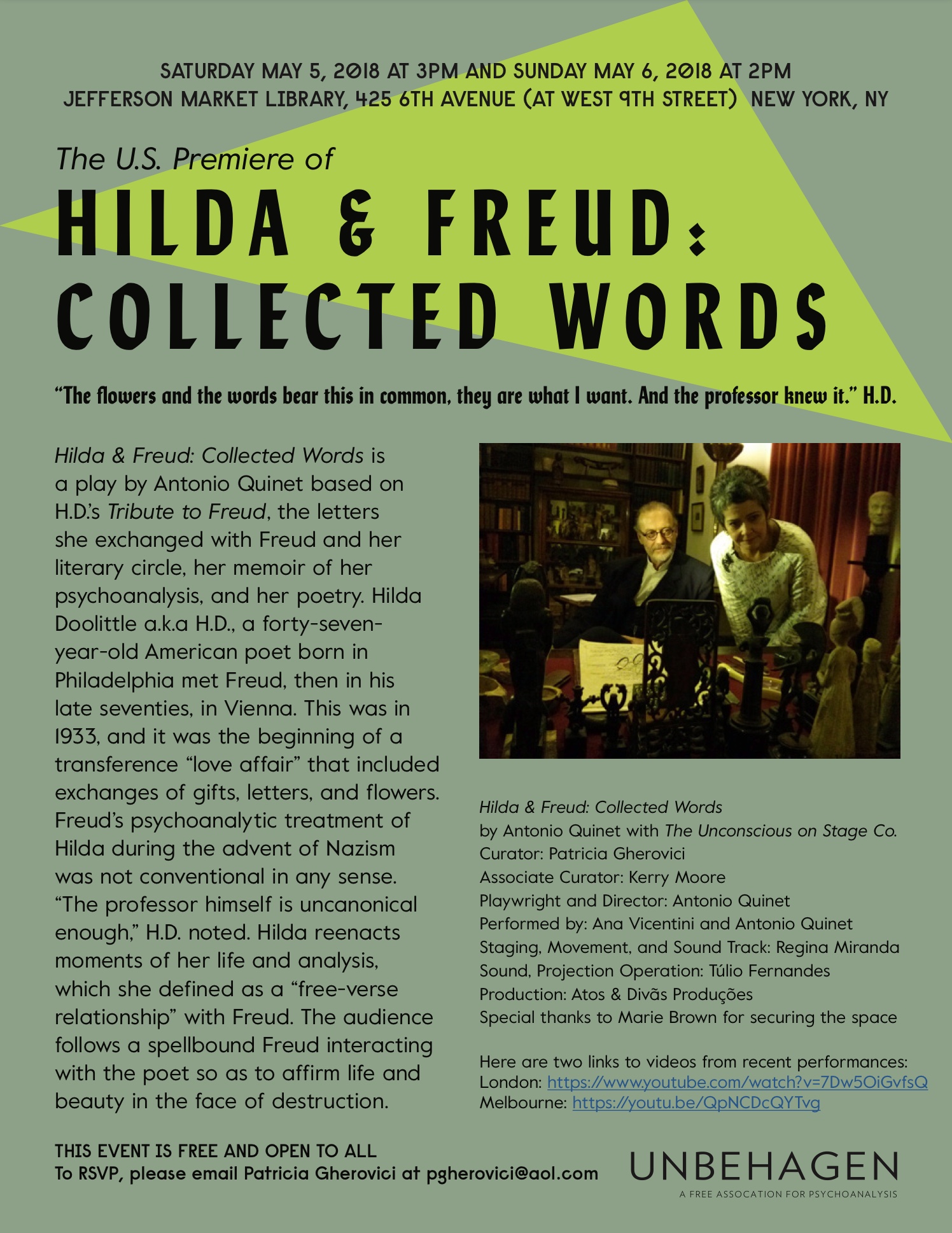 On Stage the U.S. Premiere of HILDA & FREUD: COLLECTED WORDS

“The flowers and the words bear this in common, they are what I want. And the professor knew it.” H.D.

Hilda & Freud: Collected Words is a play by Antonio Quinet based on H.D.’s Tribute to Freud, the letters she exchanged with Freud and her literary circle, her memoir of her psychoanalysis, and her poetry. Hilda Doolittle a.k.a H.D., a forty-seven-year-old American poet born in Philadelphia met Freud, then in his late seventies, in Vienna. This was in 1933, and it was the beginning of a transference “love affair” that included exchanges of gifts, letters, and flowers. Freud’s psychoanalytic treatment of Hilda during the advent of Nazism was not conventional in any sense. “The professor himself is uncanonical enough,” H.D. noted. Hilda reenacts moments of her life and analysis, which she defined as a “free-verse relationship” with Freud. The audience follows a spellbound Freud interacting with the poet so as to affirm life and beauty in the face of destruction.

Hilda & Freud: Collected Words.
by Antonio Quinet with The Unconscious on Stage Co.
Curator: Patricia Gherovici
Associate Curator: Kerry Moore
Playwright and Director: Antonio Quinet
Performed by: Ana Vicentini and Antonio Quinet
Staging, Movement, and Sound Track: Regina Miranda
Sound, Projection Operation: Túlio Fernandes
Production: Atos & Divãs Produções
Special thanks to Marie Brown for securing the space.
ANTONIO QUINET is a psychoanalyst in Rio de Janeiro, Member of the Psychoanalytic School of the Forums of the Lacanian Field, who made his debut as a playwright and director with Charcot´s Lesson (2004), followed by X, Y e S – Strindberg’s Intimate Theatre (2005), and Artorquato (2006), the latter based on the life and work of Torquato Neto (2006). From 2007 to 2009, the Unconscious On Stage theatre company also staged Óidipous, Son of Laius (2007-2009) in Rio de Janeiro, São Paulo, Belo Horizonte and other Brazilian cities. Freudian Variations 1: The Symptom (2010-2011) received its international debut in Rome, Italy and in Brazil’s major cities. Other plays include Open up, Hysterics! (2012), first staged in Brazil and then as La leçon de Charcot – théatre hystérique in Paris (2013). The Act – Freudian Variations 2 has had a successful season in Brazil (2013-2014). All of his plays have been published in Portuguese in Brazil. Quinet is the author of twelve books on psychoanalysis (several translated into Spanish and French) published in Brazil including Theory and Psychosis Clinic (5th ed., 2011), The Discovery of the Unconscious (5th ed., 2016), A Further Look: Seeing and Being Seen in Psychoanalysis (2ª ed. 2004), Charcot´s Lesson (2005), Psychosis and Social Bonds (2th ed. 2006), The Strangeness of Psychoanalysis- Lacan´s School and its Analysts (2009), The Others in Lacan (2012), Oedipus to the Letter (2015), an in-depth examination of Greek tragedy in Lacan and Freud was shortlisted for Brazil’s most prestigious literary award – the Prêmio Jabuti – in the category of psychology in 2016. Lacanian Clinical Technique: Lack(a)nian Analysis was released by Karnac Books (London) in 2017. His prolific output also includes numerous articles, reviews and essays both in Brazilian and international specialized journals and various media as well as book chapters.

ANA VICENTINI is a practicing analyst in São Paulo and a member of Psychoanalytic Association Encore (Paris). She holds a PhD in Comparative Literature (Psychoanalysis and Greek Tragedy) from CUNY and was a professor of psychoanalysis and literature at the Federal University of São Carlos and at the University of Brasilia. She is the author of articles and books published in Brazil and abroad. She has played the role of HD in Anotonio Quinet’s “Hilda & Freud: Collected Words” at the Freud Museum, London (2013 & 2015), and at the Beckett Theatre, Melbourne (2017).

REGINA MIRANDA is a theater director/choreographer and cultural administrator. For the past 17 years, Miranda has been living in New York City and Rio de Janeiro, and working internationally. She has been the Director of the New York Arts & Culture of the Laban/Bartenieff Institute of Movement Studies (LIMS) since 2001, and the Artistic Director/Choreographer of the Regina Miranda & ActorsDancers Company in Rio de Janeiro (1980-present) where she created more than 40 works presented throughout Brazil and internationally to critical acclaim. As a theater director, her most recent work was “Inside the Wild Heart”, presented at the Immersive Gallery in Brooklyn (2016. Currently, Miranda is creating the site-specific performance “Air, Water and the Flight of Birds”, which will premiere in New York on 6/1/18 at the Washington Square Park. The monologue “Naitsu” and the performance installation “Heavenly Bodies have premieres scheduled for later in 2018. Miranda holds a Master’s Degree from GCU/ Ken Blanchard School of Business, a BA in Dance Theory from SUNY/Empire State College, and is a LIMS’ Certified Movement Analyst.

THIS PLAY IS FREE AND OPEN TO ALL

To reserve a seat, please email Patricia Gherovici at pgherovici@aol.com