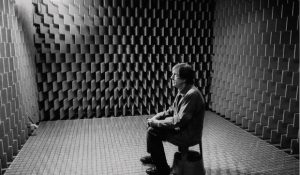 What is Echo after?

This event was the sixth in the series “In Authenticity,” hosted by Vanessa Place and Jamieson Webster.

Jack Halberstam is Visiting Professor of Gender Studies and English at Columbia University. Halberstam is the author of five books including: Skin Shows: Gothic Horror and the Technology of Monsters (Duke UP, 1995), Female Masculinity (Duke UP, 1998), In A Queer Time and Place (NYU Press, 2005), The Queer Art of Failure (Duke UP, 2011) and Gaga Feminism: Sex, Gender, and the End of Normal (Beacon Press, 2012) and has written articles that have appeared in numerous journals, magazines and collections. Jack is a popular speaker and gives lectures around the country and internationally every year. Halberstam is currently working on several projects including a book titled WILD THING on queer anarchy, performance and protest culture, the visual representation of anarchy and the intersections between animality, the human and the environment.

Evan Malater is a psychoanalyst in New York City. His most recent writing is a book length study, The Impossibility of Free Association and a short essay From Analyzing Trump to Trump as Analyst.

Sam McKinniss is an artist in New York. An exhibition of his paintings, titled Egyptian Violet, was on view this past fall at Team Gallery in New York. Recently, his portrait of Lorde was revealed as the cover art for the much loved pop star’s forthcoming album, Melodrama.

Naomi Toth lectures in English literature at the Université Paris Nanterre. She is the author of L’Écriture vive: Woolf, Sarraute, une autre phénoménologie de la perception (Classiques Garnier, 2016) and has co-edited a journal issue on emotions in literature and the arts (L’Atelier 8.1, 2016). A co-edited volume on the translation of sound in Proust is forthcoming (Honoré Champion, 2017), and After Vanessa Place, an interview with the poet, will also appear later this year as an art book.

Vanessa Place was the first poet to perform as part of the Whitney Biennial; a content advisory was posted. Place also works as a critic and criminal defense attorney specializing in sex crimes.

Jamieson Webster is a psychoanalyst in private practice in New York where she works with children, adolescents, and adults. A graduate of IPTAR, she teaches at Eugene Lang College, as well as, supervising graduate students through City University’s doctoral program in clinical psychology. She has written for Apology, Cabinet, The Guardian, The Huffington Post, Playboy, The New York Times, as well as, for many psychoanalytic publications. The Life and Death of Psychoanalysis is published with Karnac (2011). Stay, Illusion!— written with Simon Critchley— is published with Pantheon Books (2013). She is currently working on The Cambridge Introduction to Jacques Lacan, and a new book, Conversion Disorder (Columbia, 2017).

Cassandra Seltman is a writer and psychotherapist in New York City. She graduated Bard College with a degree in written arts, and published Palimpsest: Down in 2014 with inpatient press. Her critical work has been published in The LA Review of Books.