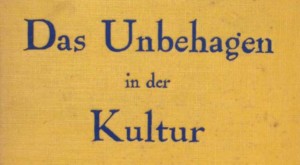 “In late March 2012, about 30 psychoanalysts, psychoanalytic students, and candidates from several different institutions and affiliations in New York, a group composed for the most part of those who are nowadays referred to as early career professionals, gathered to talk about the contemporary state of psychoanalytic formation and training. They met under the signifier Unbehagen, a reference of course to Freud’s text Das Unbehagen in der Kultur (1930). But how should we take the meaning of this Unbehagen? When the essay was first being translated into English, Freud suggested to the translator, Joan Riviere, that it might be rendered as Man’s Discomfort in Civilization. But she settled on Civilization and its Discontents. The German dictionary Langensheidt simply suggests unease for Unbehagen. In his introduction, James Strachey writes that the French word malaise might best capture Freud’s meaning.

The malaise that concerned Freud was a consequence of the loss of passion that he considered to be a necessary sacrifi ce for living in civilized society. Sexual passions, and also especially the passion of unrestrained aggression, were simply too disruptive to complex groups and to interdependent lives lived in the close quarters of civilized society. If for Freud this Unbehagen was the inescapable condition of civilized life, why would a group of psychoanalysts organize a meeting under this concept, as though there were something, some particular discontent in their lot, which could be addressed and perhaps alleviated? Were they casting doubt on Freud’s infamous pessimism about the inevitable conditions of civilized life? Were they asserting a naïve belief that they should escape this universal fate?”