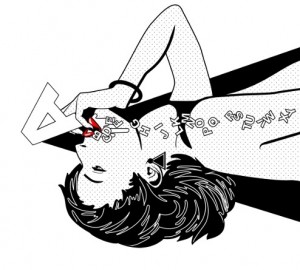 Here are some notes, reflections and questions on Marcus Coelen, Hannah Wallerstein, and Jamieson Webster’s presentations and the conversations that followed:

1) The Lending of Material, and the Dance of Withholding

– Marcus names the 3 compliances or plasticities of materiality of psychoanalysis: contingency, soma, and language.

– To consider compliance not as conformity to the mandates of a control room, but as that which lends and is not yet meaningful

– To withhold interpretation and suspend judgment (aphexia). To think of this gesture of holding in suspension as a kind of dance that is not ‘horrified with its hands tied behind its back’

– This posture of watching a horror show with one’s hands tied behind one’s back is a reference to Hannah’s sense of urgency in response to the emptiness of scarcely evident, perhaps willfully denied production of meaning on the part of her patient who produces sing song effects and lullabies in order to tip toe safely around what she perceives to be land mines of volatile meaning. How active or passive must we be in order to dance together? Perhaps we need to relinquish the activity/passivity divide in order to dance in a way that is neither cautious tip toeing, nor the self-consumptive dervish of a tazmanian devil.

2) The Violence of Juice Extraction, the Squash of Cooperation, and the Eroticism of Language left to its own devices

– Marcus on jouissance and language: “If you let go of meaning, it immediately becomes pornographic.”

– We compromise the se jouir of language in our readiness to violently extract the juice/meaningful elixir, separated from the concrete pulp which is systematically relegated as the refuse of nobler and more efficient economies of meaning. How does psychoanalysis consider the concrete? How might a poetics or philology of the concrete value language as a materially driven locomotion, rather than as an economy of meaning, with metrics determining degrees of fullness. How does Freud’s fixation on the economics of the pleasure principle as aiming toward minimal expenditure of energy limit his ability to think beyond the pleasure principle. How is this beyond is not merely an expansion of energy where the pleasure principle had mandated its minimalism?

3) The relinquishment of the agency of the historian in the transgressive telling of history within Psychoanalysis, vs. The exteriority of History propped up by general theories which are both extrapolated and extrapolating

– The history of psychoanalysis as an accretion of consistencies of ‘strange insistences,’ idioms or idiocies as makeshift phalloi constructed in states of urgency, totem poles and incarnations of Moses as responses to blackouts of meaning

– Marcus reminds us that discourse is a displacement of soma, we fall back onto the level of the material as a singularity transformed via its repetition

– Marcus reminds us that singularity is not particularity. Particularity is the measure of singularity which allows us to conceive a general theory based on an episode of singularity from which a particularity is extracted for the purposes of extrapolative theorization. How do we resist the urge to create a Theory or History which pretends to self subsist on the Outside of psychoanlaysis, beyond the pruned hedge of its operational facilities; a facile discourse exempt from the tedious labor of facilitation which is constantly bending itself out of shape to reshape itself within the factory space of language as a site of material production.

– Marcus points to the allowance of the paragrammatical in the telling of this history. The recovery of stowaway syntagms. To remember to wonder, what happened to the P that is covered up by the R? How might a cigarette butt make an R out of a P in the roulette of an everyday patio?

4) The Paranoia of Self-Referentiality vs. Listening to the Letter

– Jamieson raises this point in relation to concerns about paranoia in relation to self-referentiality. The sense that I am the cause of all things external. We consider paranoia as content driven, in contrast to the formalism of the letter. Often when psychoanalysts of differing persuasions come together, discussion centered around content forms the basis for war while those centered around formalisms tend to be constructive and enlightening in a way that allows us to locate openings toward new forms.

– Marcus insists upon the indistinguishability between the material of association/ material of the unconscious, and the metapsychological terms which seek to describe the mechanisms of these associative operations, via his example of the homophony of train and trait in the German. A feature/trait is also that which moves, the tools of description are inseparable from their locomotive proclivities. What are the stakes of considering language as a series of locomotive happenings rather than as a consolidated enterprise or economy of meaning toward interpretation?

5) Constrictive and Liberatory Varieties of Shame

– Shame at rage in the face of emptiness, while under supervisory duress to produce or extract meaning from a session of the analysis (Hannah)

– Shame in facing the terror of sharing, in anticipation of tit for tat retribution (Hannah)

– Shame at eating up what the other has put forth upon the shared table, the crime of eating what is not yours (Jamieson, harkening back to Hannah)

– Shame at having forcibly extracted meaning, and the masochistic implications, self-injury in using of force (Hannah)

– Marcus proposes a different kind of shame, upon exposure to the pornography of language left to its own devices. Perhaps this is a flush in the absence of the moralistic implications of shame as impotence, or shame as overstepping one’s boundaries at the shared table.

– Perhaps the key to escaping constrictive shame is to not think economically in terms of measurable things to be shared and allocated, but rather to think choreographically and musically via the locomotion of language.

6) Sleep and the Other Screen

– Patricia Gherovici raises the point that insomnia could result in the impossibility of the Other Screen coming up. How to sing oneself to sleep in order to bring this screen?

7) The Evolution, Devolution, and Revolu of Psychoanalysis

– Marcus claims that Freud was not expressly interested in the therapeutic import of psychoanalysis. Perhaps he was more interested in investigating and instigating the furthering of mistakes and expanding the interval of delay between first thought and last thought. Perhaps he sought to continually renew thought and resuscitate dead metaphors such that the trampoline of thoughts would remain ever buoyant, hacking away at a first thought to render it overdetermined, scheming for the birthing of yet another first thought, tripping circuits of meaning to yield a fresh indeterminacy to hack upon.

– Marcus notes that Freud does not speak of the fullness of speech as a kind of truth in the way Lacan speaks of truth of desire. When does Freud ever speak of truth, he wonders.

– Patricia Gherovici mentions that in Argentina, taxi drivers speak fluent Freudian and Lacanese. In bars a common pick up line might go something like: “Woman does not exist, what do you want to do?”