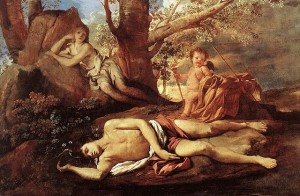 Nicholas Poussin’s four paintings on the theme of Narcissus and Echo, completed over the course of three decades, reflect a deepening appreciation of their source in Ovid’s Metamorphoses. Poussin’s interpretations of the Narcissus myth parallel critical junctures in the development of psychoanalytic theories of narcissism, including those of Freud, Andreas-Salome, and Rosenfeld. The analysis of Poussin’s evolving vision supports a radical reappraisal of the enigmatic myth at the heart of psychoanalytic theory and practices, and the disturbances named after it.

Click here to read Adele Tutter’s “Under the mirror of the sleeping water: Poussin’s Narcissus” published in the International Journal of Psychoanalysis, 2014

Adele Tutter files a complaint against Freudian psychoanalysis for its impatience with the stretched temporality and dilated figuration of mythological adventure. According to Adele, Freudian narcissism reduces the complex web of object relations arising from Narcissus’ encounter with an irreducible otherness to an episode of auto-erotically fixated vanity. Adele embarks on a mission to restore mythological elucubration to psychoanalytic theory, plumbing the tensions between the flowering surface and the summoned depth, between the echo chamber and the mute stone, through a retelling of the myth of Narcissus based on a close reading of Ovid’s verse:

“In Ovid’s telling, Leiriope, worried about the longevity of her beautiful son Narcissus, consults the blind oracle Tiresias, who tells her that he will live a long life so long as he does not “know” himself. As a young man, Narcissus “turned down all comers, for “in his yielding beauty / was such inflexibility and pride / that no young man or woman ever moved him” (Met III.455–457). One day, he is separated from his hunting companions; he rejects the advances of the nymph Echo, and instead falls in love with his reflection in a still pool of water. Stricken with grief and frustrated by his unattainable love, and seeing (“knowing”) that it is in fact himself, he dies, and is transformed into the flower that bears his name, while Echo, similarly bereaved, turns into stone.”

Yet I would contend that if Freud skimmed Ovid’s myth of Narcissus at the expense of faithfully preserving the latticework of its diegetic nuances, he did so in order to gain the force of its extra-diegetic structural hyperbole. Far from collapsing the nuanced folds of myth into facile points of identification, Freud exaggerates the traumas of the tallest tales to raise the stakes from a metamorphosis of conditions to a metapsychology of possibilities.

From the tragic aftermath of Narcissus’ mimetic crisis, Freud extracts the bipolarity on which he bases his conceptualization of primary and secondary narcissism. This bipolarity resonates on many levels – between the attack of the image and the decay of the voice, between the unipotency of merger (the transparency of a self replenishing body of homogeneous water) and the totipotency of acquisition (the metamorphosis of a man into a flower), between the oneness with the medium and encapsulation of the effects.

In my view, the tragedy of Narcissus’ self annihilation lies in his inability to imagine a third kind of surface between the blackout of self embodiment (the inability to see oneself) and the colloidal face of the enigmatic other (the inability to not be seen by the other, to escape the blinding searchlights of a panoptical other), between the lure of the sheer face and the plunge of the opaque body, between the scintillating surface and the voluptuous figure. If only Narcissus had the benefit of a protective phobia to bar him from equating seeing with knowing, he might have harnessed the apotropaic power of the shine of the pool as a shield against the hazards of mimetic identification instead of drowning himself in an act of sacrificial fusion. If only he could have suspended the moment of awe prior to the sacrifice of the one to the other for the sake of the only.

The fate of Narcissus exposes the hazards of metaphor as a quasi-religion of seeing to know to die to name, in that order. Metaphorical construction is a process akin to the post-mortem naming of the flower that substitutes for the man who knew the eclipse of his being too precisely. Metaphor seeks to secure the restless auto-reversibility flickering between the pre-natal esoteric silences of mystical retention and the resurrectionary efflorescences of pornographic homage. Metaphor never fails to memorialize itself, forming a loop that mourns the loss of the unborn child of an everlost mother, blind to the floral forensics prior to the name. What if we died before we knew? What if we bloomed before we died? What happens when metaphor tires of feigning surprise to reproduce the perennial exhibitionism of this temperamental peekaboo? When metaphor fails to resurrect loss in the form of gain, suffering to bear anew? When depth gives way to a flattened wasteland of insufferable floral drift? Can we rescue the glissando of metonymy from the punctuality of metaphor?

In this vexed space between the haunt of the visage and the tear of the voice, can we theorize a metonymization of metaphor as the staging of a fantasmatic scene of narcissistic pluripotency? In the wake of metaphor’s failure to infinitely and seamlessly reproduce the tumescence of the phallus for the mystified subject, can psychoanalysis arrive in the aftermath of faithful mythologizing to scavenge the exhausted wasteland and decipher the braille of its ruins. In analysis we encounter the imbricated specters of metaphor’s totems with the free associative budge and squirm of a metonymy which gratuitously insists to consist, in continual counterpoint with the confections of metaphor which preemptively consist to insist.

Dying many deaths, though not a coward, narcissistic pluripotency negotiates the necessary failure of the drive to preserve itself by complicating the peekaboo of flowering depths with funerals of signification. Archetypes give up their petulant ghosts to become indifferent corpses of sense. And yet the narcissistic luxury of an archetypal potpourri recapitulates in the aftermath of skeletons, as if to restore a lingual tongue to dental words. What spurs these hallucinatory renaissances, and how do the skeletal interludes transform the impromptu arrivals of holograms of renewed seeing? Narcissus seems to live on as a specter of impossible love, spurring us to heed the stones of a former echo.

To conclude, I would propose that we see Freud’s primary narcissism as a state of exception responding to the emergency of finitude, rather than as a first responder on standby in case of an emergency. The emergency pre-exists us, though we might feign to manufacture its body double. The only thing that is primary about primary narcissism is the locomotion of its pseudopodia, as per Freud:

“Thus we form the idea of there being an original libidinal cathexis of the ego, from which some is later given off to objects, but which fundamentally persists and is related to the object-cathexes much as the body of an amoeba is related to the pseudopodia which it puts out.”