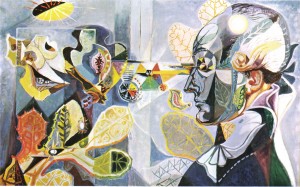 There is a kind of nudity in anonymity, at least as much as there is a mask. The particular pleasure of the discussion: despite its intimacy, nobody in the room was familiar, on terms other than the texts, with more than a handful of others.

◊◊ In addition to those who begin at the beginning, and those who begin at “In the Beginning…”, there was also a royal figure according to whom you begin at the beginning, and go on til you come to the end, then stop. You can stop it with a cut or a plug. Or a question, which is neither, but is how the first session of acephalic discontents concluded at the place where, really, it begins. The question, from A: What is the strategy of acephale? Why Bataille’s project of acephale, the figure of acephale, the writings that coalesced around the image of acephale — today? Perhaps acephale, the condition of headlessness, is strategy? If so, what challenge does it respond to? Why are our discontents acephalic?

◊◊ The first session of acephalic discontents was, properly, a “prequel.” Before moving to discussion of Bataille’s writings on acephalic communities and the tradition springing directly from them, we examined a collection of writings that together constellated an outline of the acephalic question or strategy: Sigmund Freud’s Group Psychology and the Analysis of the Ego; Georges Bataille’s short note “The Absence of Myth”; and Lacan’s commentary on the knot of acephale, dream and unconscious in the second book of his Seminar. The readings gravitated around the basic question: “what binds groups together?” Or more generally, what is the glue that keeps things from falling apart? And what problems might there be with that? The hypothesis that binds Freud and Bataille, that motivate Acéphale continues to motivate acephale, is that something profoundly different, or, in Freud’s words, a “profound alteration in mental activity,” (and we might add Bataille’s expérience) is at work in collectives.

◊◊ Three areas in which the strategy of acephale was relevant — the limbs of acephale — were separated so that they might be cobbled back together after the work of mediation. Three large circles on the floor, marked, respectively: “Society”; “Elective Communities”; “Form and Relation”. The division, which was also used to structure the conversation, suggested that the general problems of association, the group relations between humans, and the discontents that are thereby generated, touch on many dimensions of our experience and knowledge without lodging into a single one. Take, for example, the role and structure of identification in Freud’s Group Psychology. Freud is discussing something that speaks to the fundamental aspects of social structure, that properly supplements critical theories of society, like those of Marx; however, there also moments of Freud’s description of identification that seem to belong in a more philosophical register, at a remove from questions of social theory, as, for example, when Freud speculates on identification as a primary or originary mode of relation, a thought that might be more appropriately followed up by reflection on the tangled philosophical history of mimesis, or Walter Benjamin’s recollections of impersonating a stool or windmill as a child in Berlin, than by examining institutional structures. Finally, if one takes identification as it functions in large-scale social forms as properly ambivalent — both cementing and securing repressive structures of domination, while making possible other kinds of experience and activity in the common world — then the question is raised of concrete action in the form of elective communities or affinity groups. For example, Bataille’s Acéphale group, which aimed to destroy the world through (ceaselessly) sacrificing it, or Freud’s early psychoanalytic groups, which aimed to consolidate, formalize and transmit a new “science,” perhaps a new form of science as a particular relation of knowing and acting, of doctrine and logic of discovery. The strategy of acephale, borne out of the obsession and experience of the elective community of “secret society” of Acéphale relies, at least to some extent, on the idea that there are possibilities and limits to small groups that can be interrogated and explored. In Bataille’s words: “…if Freud himself was not able to practice a general analysis of living forms, this is not to say that he did not leave the possibility of crossing that divide open to those who follow him. And not only the analysis of what is, is henceforth open in several senses, but it has become possible to envision experience itself, which is to say the attempt to pass from understanding into action.”

◊◊ The curators for the first session, SPI’s Group for Surrealist Research, introduced the discussed with a meditation on the form of relation that binds us together in a large social sense, guiding both a structural and libidinal economy: money. Money, which Pierre Klossowksi called “living,” the commodity of commodities. Reflections on acephalic strategies, or the strategy of acephale, take place within the horizon of the spectral headlessness of capital, which deposes classical figures of identification and authority and disperses its repressive and dominating structure in abstractions that mimic elements of acephalic logic. Capitalism institutes the homogenized system of general equivalency, which is nonetheless experienced as chaotic and destructive, which happily beheads its figures and finds replacements to carry out the imperatives of its logic.

◊◊ The very word “community” becomes haunted by its false adoption by the neoliberal rhetoric of identity, as well as the fact that it is only capitalist relations that create a globe in common. Perhaps communism, or communization, will have to be rethought in terms of acephale.

◊◊ Society: An indispensable element of Freud’s Group Psychology was located in his insight that all social institutions, regardless of their structure, require regular injections or infusions of libido and identification in order to continue smooth functioning. Freud’s notion of the substitutable ego-ideal may be capable of understanding an element of the love of abstractions that Marx cannot touch, such as the imagined community of the nation.

◊◊ Participants were ask to dump the contents of their wallet on a table in the center of the room where the three circles touched. Hesitance raised the question of the position of money between the real and the symbolic. It was observed that images on paper money are like the inverse of André Masson’s Acéphale sketch: detached, floating heads rather than decapitated bodies. Two broken halves that don’t add up to a whole, each testifying to a sacrifice.

◊◊ The nature of political myth and aesthetic ideology — the crafting ego ideals through poetry, as in the odd postscript to Freud’s text, or a more general “aesthetic” of cultural representations purveyed by the state or culture industry — was addressed as a point of contact between Bataille’s “Absence of Myth” and Freud’s Group Psychology. Bataille’s ambivalence, in “The Absence of Myth,” toward the possibilities and dangers of crafting ideals, suggested the possibility of a strategic motion of creative destruction. It was pointed out that Bataille’s formulations owe much to Nietzsche, who also nursed life-long fantasies of crafting elective communities. “Black night is also a sun,” is a direct quotation from Zarathustra, about which Bataille’s short text could be read as a commentary. Both Bataille and Freud point out the properly impossible situation of recognizing collective figures and myths as no longer having “meaning,” and yet still holding validity, even in the time of their “absence” (modernity, capitalism, whatever you want to call it.) Freud takes a more tragic, rationalist/ individualist stance, whereas Bataille (like Nietzsche) is tempted to test out the creative/ destructive power of myth in elective communities, as potential sites for the transformation of society.

◊◊ The question of trauma in relation to political myth and the identificatory function of images and figures was raised: what is it that pushes us to rely on these supports? What drives it? Does the insistent demand for identificatory work (approximating the word Freud used to describe the action of the drives, Arbeitsanforderung) inherent in any collective testify to some kind of damage? Is it historical or anthropological? Do we, as it were, “flee” into collectives, or do intense collective experiences present a kind of truth of our fundamental relationality, our being-in-common? Whatever the differences in description of the libidinal economies of groups and the function of myth for collective in Freud in Bataille, both share the hypothesis that the collective or common has a sui generis character, and one that is closely related to sacrifice.

◊◊ The discussion ranged from the desire for death, to the problem of cohesion, back to identification. We tended to gravitate away from the texts and towards the “figure” of Bataille.

◊◊ Stress was laid on the importance of avoiding simplistic interpretations of acephale as structurelessness or leaderlessness. “The Absence of Myth” it was pointed out, could be in some sense a synonym for acephale: a condition in which the validity and sense of purposes, the instantiation of authority, could never be recognized as legitimate: a process of variable but continual sacrifice of leaders and principles, rather than the idea of “leaderlessness” or its even more debased forms in various ideological celebrations of “horizontal” organization. It was commented that perhaps the perfect community would be the one in which everyone is willing to die but nobody will to raise the knife to commit the sacrifice. This, some point out, was the situation with Bataille’s Acéphale group: all willing to be the sacrifice, none willing to be the executioner.

◊◊ Wilfred Bion, in Experiences in Groups, notes that groups are often “led” or dominated by an absent figure. In this case, it was a cab-driver in the city of Philadelphia, who argued animatedly to B, when he was driving him to the art museum earlier in the day, that he shouldn’t waste his money there. The money and opulence of the fine arts sector of the culture industry, the cab driver argued, was obscene in light of the abysmal situation of schools and other public services (the situation is extreme in Philadelphia). He argued that the right action would rather be to take the admission fee to a strip club. The cab driver offered, in a moment of emotional expenditure, to waive the fare for the trip to the club.

The divisions of “Society,” possibilities and limits of “Elective Communities”, and meditations on originary sociality and “Forms of Relation” remain leitmotifs to guide the project into the next session, devoted to writings of Bataille centered in the historical figure, journal and secret society of Acéphale proper.